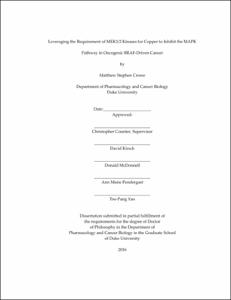 The gene BRAF is mutated to remain aberrantly activated in a large number of human malignancies, most prominently in melanoma. The most common mutation in BRAF is a missense mutation that substitutes glutamic acid for valine at codon 600 (V600E) that leads to constitutive activation of this kinase. In this active state, BRAFV600E phosphorylates and activates the MEK1 and MEK2 kinases, which in turn phosphorylate the ERK1 and ERK2 kinases of the MAPK pathway to promote tumorigenesis. Targeting this pathway is a well-validated strategy to treat BRAF-mutant cancer. Inhibitors of both BRAFV600E and the MEK1/2 kinases are used to treat BRAF-mutant melanoma and are being evaluated in other cancers as well. However, the duration of response to these targeted therapies is limited by innate and acquired resistance, which is often mediated through reactivation of the MAPK pathway. Thus, new targeted therapies to inhibit MAPK signaling in BRAF-mutant malignancies are required. To this end, MEK1/2 kinases require copper (Cu) for enzymatic activity and signaling. We therefore tested whether the dependency of these validated targets on Cu could be leveraged for the treatment of BRAF-mutant cancer.

We report that genetic reduction of Cu import through disruption of the gene encoding the high affinity Cu transporter CTR1 or pharmacological chelation of Cu with the drug tetrathiomolybdate (TTM) suppressed MAPK signaling in both in vitro and in vivo models of BRAF-mutant tumorigenesis. This reduction in MAPK signaling correlated with a reduced potential for tumorigenic growth and an increase in survival of tumor-bearing mice. Finally, TTM reduced the transformed growth of a number of human melanoma cell lines engineered to be resistant to current MAPK pathway inhibitors. As such, Cu chelation holds promise as a novel treatment for BRAF-mutant cancers and may find value in targeting resistance to current MAPK pathway inhibitors.