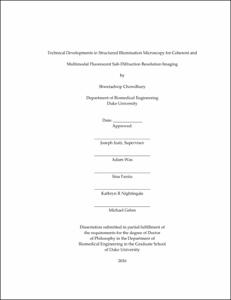 Optical microscopy plays a crucial role in the biological sciences for its ability to enable visualization of biological samples at sub-cellular levels. Many imaging subdivisions exist under this umbrella of general microscopy, and each are tailored towards specific design, contrast, and visualization constraints. Standard examples that have found widespread use include dark-field, phase-contrast, holographic, and fluorescent microscopies. However, a critical factor that physically limits the optical resolution of general microscopy is diffraction. Unfortunately, this “diffraction-limit” can prevent visualization of significant biologically relevant structures, which in turn can limit biological insights. In response to such a limit, several works have advanced the field of sub-diffraction resolution imaging, which consist of optical imaging techniques that seek to achieve imaging resolutions beyond that which is allowed by the diffraction-limit. This set of techniques can largely be divided into two classes. The first class of sub-diffraction techniques is targeted towards cases where the sample is coherently illuminated and diffracts into the imaging system’s aperture. For such cases, synthetic aperture (SA) is a popular choice and operates by using oblique illuminations to spatiotemporally synthesize a wider frequency support into the image than allowed by the diffraction limit. The second class of sub-diffraction techniques, often referred to as "super-resolution" techniques, typically utilize specialized fluorophores with either photoswitching or depletion capabilities. Photoactivated localization microscopy (PALM) is a super-resolution example that localizes photoswitchable fluorophores to sub-diffraction resolutions per acquisition, before combining into a final super-resolved image. Stimulated emission depletion (STED) is another super-resolution example that spatially modulates its excitation to narrow its optical point-spread-function. Unfortunately, SA and fluorescent super-resolution techniques are generally incompatible for sub-diffraction resolution fluorescent and coherent imaging, respectively – thus, a multimodal sub-diffraction imaging solution compatible with both coherent and fluorescent imaging has remained elusive.