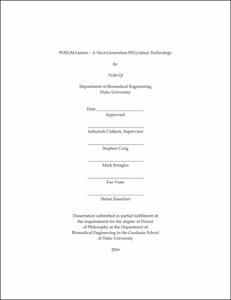 The delivery of therapeutic peptides and proteins is often challenged by a short circulation half-life, necessitating frequent injections that limit efficacy, reduce patient compliance and increase treatment cost. The covalent conjugation of therapeutic peptides and proteins, and more recently oligonucleotide-based drugs, with the “stealth” polymer poly(ethylene glycol) (PEG), termed PEGylation, is one of the most commonly used approaches to increase the in vivo half-life and reduce the immunogenicity of these therapeutic biomolecules. However, after several decades of research and clinical use, the limitations of PEGylation have begun to emerge.

Conventional methods for synthesizing peptide/protein-polymer conjugates have drawbacks including low yield, non-trivial separation of conjugates from reactants, and lack of control over site and stoichiometry of conjugation, which results in heterogeneous products with significantly compromised biological activity. Additionally, anti-PEG antibodies have been induced in patients treated with PEGylated drugs and have been shown to correlate with rapid clearance of these drugs. High levels of pre-existing anti-PEG antibodies have also been found in individuals naïve to PEGylated agents, which are associated with serious first-exposure allergic reactions.

To address the synthetic limitations of PEGylation, a general approach for the high-yield synthesis of site-specific (C-terminal) and stoichiometric (1:1) peptide/protein-polymer conjugates, named sortase-catalyzed polymer conjugation, was developed. Demonstrating proof-of-concept of the approach with green fluorescent protein (GFP) as a model protein, sortase A from Staphylococcus aureus was used to site-specifically attach an initiator solely at the C-terminus of GFP, followed by in situ growth of the PEG-based brush polymer, poly(oligo(ethylene glycol) methyl ether methacrylate) (POEGMA) from the protein macroinitiator by atom transfer radical polymerization (ATRP). Sortase-catalyzed initiator attachment proceeded with high specificity and near-complete (~ 95%) product conversion. Subsequent in situ ATRP in aqueous buffer produced 1:1 stoichiometric conjugates with > 90% yield, tunable MW, low dispersity, and no denaturation of the protein. The extraordinarily high yield compares favorably to order of magnitude losses typically seen in conventional PEGylation processes.

Next, the therapeutic potential of POEGMAlation, or the conjugation of POEGMA to a peptide or protein, was demonstrated by implementing the developed sortase-catalyzed polymer conjugation strategy with exendin-4 (exendin), a therapeutic peptide for treating type 2 diabetes, to synthesize exendin-C-POEGMA conjugates with a wide and tunable range of molecular weights (MWs) and low dispersity. A single subcutaneous injection of exendin-C-POEGMA conjugates lowered blood glucose for up to 120 h in a diabetic mouse model. Most intriguingly, we showed that appending PEG as oligomeric side-chains on the conjugated POEGMA and tuning the side-chain length completely eliminated the reactivity of exendin-C-POEGMA conjugates toward patient-derived anti-PEG antibodies without compromising in vivo efficacy. Clinically, the lack of anti-PEG antigenicity of POEGMA conjugates is expected to completely eliminate serious first-exposure allergic reactions and the accelerated blood clearance of POEGMA-drug conjugates due to pre-existing anti-PEG antibodies in patients.

Collectively, these results establish POEGMAlation as a next-generation PEGylation technology that is highly useful for improving the pharmacological performance of therapeutic biomolecules while providing a timely solution to the increasing levels of pre-existing anti-PEG antibodies in patients that are seriously hindering the safety and efficacy of traditional PEGylated drugs.