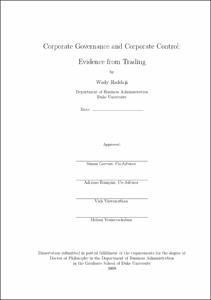 In Chapter 2, I study the role of trading as a governance mechanism. I hypothesize that governance through trading plays a significant monitoring role in practice and that engaging in "voice" and "exit" can be substitutes. I show that abnormal turnover following earnings announcements is significantly higher for firms with large institutional blockholders than for those with small individual

largest institutional investor. Moreover, this excess trading is driven by mutual fund investors, which are non-interventionist and thus are more likely to engage in "exit" than "voice". I also show that for firms with large institutional blockholders, abnormal trading following public announcements increases with liquidity.