Visionary Experience of Mantra : An Ethnography in Andhra-Telangana 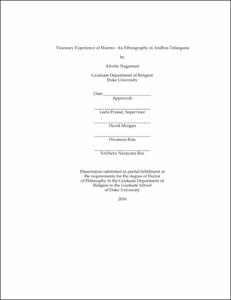 The use of codified sacred utterances, formulas or hymns called “mantras” is widespread in India. By and large, scholarship over the last few decades studies and explains mantras by resorting to Indian sources from over a millennium ago, and by applying such frameworks especially related to language as speech-act theory, semiotics, structuralism, etc. This research aims to understand mantra, and the visionary experience of mantra, from the perspectives of practitioners engaged in “mantra-sadhana (personal mantra practice).”

The main fieldwork for this project was conducted at three communities established around “gurus (spiritual teachers)” regarded by their followers as seers, i.e., authoritative sources with visionary experience, especially of deities. The Goddess, in the forms of Kali and Lalita Tripurasundari, is the primary deity at all three locations, and these practitioners may be called tantric or Hindu. Vedic sources (practitioners and texts) have also informed this research as they are a part of the history and context of the informants. Adopting an immersive anthropology and becoming a co-practitioner helped erase boundaries to get under the skin of mantra-practice. Fieldwork shows how the experience of mantras unravels around phenomena, seers, deities, intentionality and results. Practitioners find themselves seers mediating new mantras and practices, shaping tradition. Thus, practitioners are the primary sources of this research.

This dissertation is structured in three phases: preparation (Chapters One and Two), fieldwork (Chapters Three, Four and Five) and conclusions (Chapter Six). Chapter One discusses the groundwork including a literature review and methodological plan— a step as crucial as the research itself. Chapter Two reviews two seers in recent times who have become role-models for contemporary mantra practitioners in Andhra-Telangana. Ethnographic chapters Three, Four and Five delve into the visionary experience and poetics of mantra-practice at three locations. Chapter Six analyses the fieldwork findings across all three locations to arrive at a number of conclusions.

Chapter Three takes place in Devipuram, Anakapalle, where a temple in the shape of a three-dimensional “Sriyantra (aniconic Goddess form)” was established by the seer AmritanandaNatha Sarasvati. Chapter Four connects with the community surrounding the seer Swami Siddheswarananda Bharati whose primary location is the Svayam Siddha Kali Pitham in Guntur where the (image of the) deity manifested in front of a group of people. Chapter Five enters the experience of mantras at Nachiketa Tapovan ashram near Kodgal with Paramahamsa Swami Sivananda Puri and her guru, Swami Nachiketananda.

Across these three locations, which I find akin to “mandalas (groups, circles of influence, chapters),” practitioners describe their experiences including visions of deities and mantras, and how mantras transformed them and brought desired and unexpected results. More significantly, practitioners share their processes of practice, doubts, interpretations and insights into the nature of mantras and deities. Practitioners who begin “mantra-sadhana (mantra-practice)” motivated by some goal are encouraged by phenomena and results, but they develop attachment to deities, and continue absorbed in sadhana. Practitioners care to discriminate between what is imagined and what actually occurred, but they also consider imagination crucial to progress. Deities are sound-forms and powerful other-worldly friends existing both outside and within the practitioner’s (not only material) body. We learn about mantras received from deities, seen and heard mantras, hidden mantras, lost mantras, dormant mantras, mantras given silently, mantras done unconsciously, and even the “no”-mantra.

Chapter 6, Understanding Mantras Again is an exploration of the fundamental themes of this research and a conceptual analysis of the fieldwork, keeping the mantra-methodologies and insights of practitioners in mind—what are mantras and how do they work in practice, what is visionary experience in mantra-practice, what are deities and how do they relate to mantras, and other questions. I conclude with a list of the primary sources of this research— practitioners.