Essays on the News Media, Governance, and Political Control in Authoritarian States 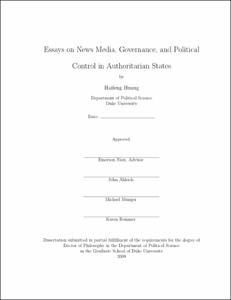 This dissertation uses game-theoretic modeling, statistical testing, and case studies to analyze how authoritarian governments manage the news media to maintain regime stability, control local officials, and make reform. In the first essay, ``Regime Competence and Media Freedom in Authoritarian States'', I explain why some authoritarian regimes allow more media freedom than others, as they tradeoff increased rents when the media is suppressed with the reduced risk of being misjudged by citizens when the media is free. In the second essay, ``Local Media Freedom, Protest Diffusion, and Authoritarian Resilience'', I argue that media reports about citizen protests, which may lead to protest diffusion, do not necessarily destabilize authoritarian rule. If protests are targeted at local governments, the central government of an authoritarian regime can use media-induced protest cascades to force local officials to improve governance. In the last essay, ``Central Rhetoric and Local Reform in China'', I address the puzzle of why the Chinese government would furnish the state media with conservative and dogmatic rhetoric on the one hand and allow reform on the other, by showing that this strategy is used to control local governments' pace of reform.