Practicing Disbelief: Atheist Media in America from the Nineteenth Century to Today 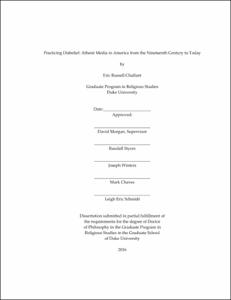 While the field of religious studies increasingly turns toward material culture as a counterbalance to understandings of religion that privilege questions of individual belief, theology, and text, influential histories of atheism in the West remain largely confined to the mode of intellectual history. This is understandable when atheism is commonly understood first-and-foremost as an idea about the nonexistence of God. But like religion, atheism is not a purely intellectual position; it is rooted in interpersonal emotional exchanges, material objects and media, and historically-contextual social communities. This dissertation uses tools from the materialist turns in both religious studies and media studies to explore the history of American atheism and its reliance on non-intellectual and non-rational forces. Drawing on theories of affect, visual culture, and aesthetics, it argues that atheism in America has always been more than an idea. In particular, it uses different media forms as lenses to examine the material bases of evolving forms of American disbelief from the 19th century to today. Using archival records of nineteenth-century print media and political cartoons, transcripts and audio-recordings of radio broadcasts during the mid-twentieth-century, and digital ethnography and discourse analysis on contemporary Internet platforms, this dissertation argues that American irreligion has often eschewed the rational in favor of emotional and material strategies for defining a collective identity. Each chapter highlights different metaphors that have been enabled by print, broadcast, and digital media – metaphors that American unbelievers have used to complicate the understanding of atheism as simply a set of beliefs about the nature of reality.