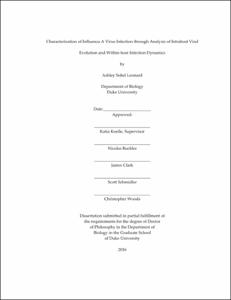 Influenza A virus is a major source of morbidity and mortality, annually resulting in over 9000 deaths in the United States alone. As a segmented, RNA virus, influenza has a high mutation rate, facilitating its evolution to overcome cross protective immunity through natural selection and adapt to new host species or sources of evolutionary pressure through reassortment. The high viral mutation rate also means that these processes affect not only evolution at the population level, but also at the intrahost level. While these processes have been well characterized for population-level viral evolution, viral evolution within a single host is far less well defined. In this dissertation, I characterize influenza infection at the intrahost level with respect to viral evolution and infection dynamics. In the second chapter, I critically evaluate methods for estimating the transmission bottleneck size for influenza A virus from viral sequencing data. The transmission bottleneck describes the infecting population size, a determinant for the level of genetic diversity present at the onset of infection. I show current methods may be biased, both by the criteria used to identify sequencing variants and the presence of demographic stochasticity. In response to these biases, I introduce a new method that (1) corrects for differences in variant calling criteria and (2) accommodates demographic stochasticity. Chapters 3-5 are based on data collected from an existing human challenge study with influenza A virus. In this challenge study, volunteers were experimentally infected with a heterogeneous viral inoculum that had adapted to the conditions in which it had been generated. In chapter 3, I show that transmission was governed by a selective bottleneck and that subsequent intrahost viral evolution was dominated by purifying selection. In chapter 4, I further characterize the observed intrahost viral evolution through the reconstruction of viral haplotypes to evaluate different models of selection. These models differed by the level at which selection was acting, whether selection is focused on individual loci, multiple loci within a single gene segment, or across gene segments. Model selection favored the third model, wherein selection acted across gene segments, thereby establishing that the effective viral reassortment rate was limited in these subjects. In chapter 5, I develop a mathematical model for within-host influenza infection linking viral replication and the host immune response with the development of disease symptoms. I fit this model to experimental data collected from the challenge study. Analysis of the model fits indicated that much of the heterogeneity in the data between subjects could be explained by interindividual variation in viral infectivity. This finding echoed the results of chapters 3 and 4, that there were quantifiable differences in the infecting viral populations between the study subjects. Taken together, these observations suggest that

intrahost viral genetics may underlie the differences between the subjects’ response to infection.