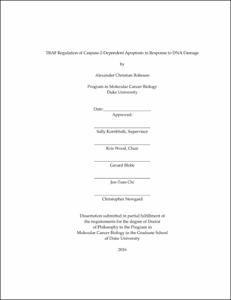 The DNA of a cell operates as its blueprint, providing coded information for the production of the RNA and proteins that allow the cell to function. Cells can face a myriad of insults to their genomic integrity during their lifetimes, from simple errors during growth and division to reactive oxygen species to chemotherapeutic reagents. To deal with these mutagenic insults and avoid passing them on to progeny, cells are equipped with multiple defenses. Checkpoints can sense problems and halt a cell’s progression through the cell cycle in order to allow repairs. More drastically, cells can also prevent passing on mutations to progeny by triggering apoptosis, or programmed cell death. This work will present two separate discoveries regarding the regulation of DNA damage-induced apoptosis and the regulation of the spindle checkpoint.

The protease caspase-2 has previously been shown to be an important regulator of DNA damage-induced apoptosis. In unstressed cells caspase-2 is present as an inactive monomer, but upon sensing a stress caspase-2 dimerizes and becomes catalytically active. The mechanisms that regulate this dimerization are poorly understood. The first research chapter details our development of a novel method to study dimerized caspase-2, which in turn identified TRAF2 as a direct activator of caspase-2. Specifically, we utilized the Bimolecular Fluorescence Complementation technique, wherein complementary halves of the Venus fluorophore are fused to caspase-2: when caspase-2 dimerizes, the non-fluorescent halves fold into a functional Venus fluorophore. We combined this technique with a Venus-specific immunoprecipitation that allowed the purification of caspase-2 dimers. Characterization of the caspase-2 dimer interactome by MS/MS identified several members of the TNF Receptor Associated Factor (TRAF) family, specifically TRAF1, 2, and 3. Knockdown studies revealed that TRAF2 plays a primary role in promoting caspase-2 dimerization and downstream apoptosis in response to DNA damage. Identification of a TRAF Interacting Motif (TIM) on caspase-2 indicates that TRAF2 directly acts on caspase-2 to induce its activation. TRAF2 is known to act as an E3 ubiquitin ligase as well as a scaffold for other E3 ubiquitin ligases. Indeed, we identified three lysine residues in the caspase-2 prodomain (K15, K152, and K153) important for its ubiquitination and complex formation. Together these results revealed a novel role for TRAF2 as a direct activator of caspase-2 apoptosis triggered by DNA damage.

During mitosis, when the cell prepares to divide, great care is taken to ensure that the chromosomes are properly segregated between the two daughter cells by the mitotic spindle. This is primarily accomplished through the spindle checkpoint, which becomes activated when the mitotic spindle is not properly attached to each chromosome’s kinetochore. When activated, the primary effector of the spindle checkpoint, the mitotic checkpoint complex (MCC), inhibits the anaphase-promoting complex (APC/C) by binding to the APC/C co-activator, CDC20. This prevents the APC/C from targeting critical pro-mitotic proteins, like cyclin B and securin, to promote mitotic exit. Although the function of the MCC is well understood, its regulation is not, especially in regard to protein phosphatases To investigate this, we activated the spindle checkpoint with microtubule inhibitors and then treated with a variety of phosphatase inhibitors, examining the effect on the MCC and APC/C. We found that two separate inhibitors, calyculin A and okadaic acid (1uM), were able to promote the dissociation of the MCC. This led to the activation of the APC/C, but the cells remained in mitosis as evidenced by high levels of Cdk1 activity and chromosome condensation. This is the first time that phosphatases have been shown to be essential to maintaining the MCC and an active spindle checkpoint.