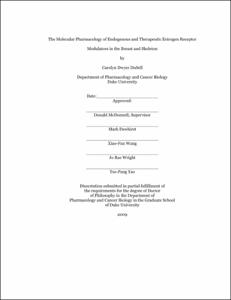 Estrogens and the estrogen receptor (ER) have been implicated in the etiology of breast cancer and osteoporosis. However, the mechanisms by which this receptor-ligand complex manifest their regulatory activities in these processes is not completely understood. The development and subsequent definition of the molecular mechanism of action of selective ER modulators (SERMs), compounds with differential relative agonist/antagonist activity, has uncovered an unanticipated complexity in this signaling pathway. Furthermore, these analyses indicat that it is likely that in addition to the classical steroidal estrogens, which exhibit agonist properties, endogenous compounds exist that interact with ER and function as physiological SERMs. Recently, 27-hydroxycholesterol (27HC) was identified as an endogenous ER ligand with tissue-specific estrogenic/anti-estrogenic activities. Indeed, we determined that 27HC exhibited the three basic properties of a SERM: 1) it bound competitively with estradiol (E2) to both genetic subtypes of ER, ER&#945; and ER&#946;; 2) it induced a unique conformation of ER that is likely related to its biological activity; and 3) it displayed tissue-specific ER modulatory activity in the cardiovascular system, breast, and bone. In particular, we undertook a series of in vivo studies to show that a pathological elevation of 27HC was associated with decreased bone quantity, an effect that was partially rescued by E2 supplementation. The ability of 27HC to decrease bone density in the absence of endogenous estrogens suggests that the circulating level of 27HC may be of critical importance in determining osteoporosis risk in post-menopausal women. Interestingly, cholesterol-lowering statins have been shown to improve bone density; thus, given the stoichiometric relationship between circulating cholesterol and 27HC, our data provide a possible explanation for the observed bone sparing actions of this class of drugs.

In general, it is considered that SERM activity can be explained by the ability to induce differential alterations in ER structure and the impact that this has on the recruitment of functionally distinct cofactors. The results of our studies reveal a much more complex picture and suggest that some SERM pharmacology can be ascribed to actions in pathways that do not include ER. Specifically, we have determined that the SERM 4-hydroxy-tamoxifen (4OHT) can bind to and activate the aryl hydrocarbon receptor (AHR). Given that AHR controls the expression of E2-metabolizing enzymes, our finding that 4OHT regulates AHR in the context of breast cancer could have important pharmacological and pathological implications. Interestingly, our preliminary in vitro data indicate that the ability of 4OHT to inhibit osteoclast (OC) differentiation, and thus aid in preserving bone density in post-menopausal women, is primarily dependent on expression of AHR, not ER. Conversely, the inhibitory activity of raloxifene (RAL), another SERM, on OC differentiation was absolutely dependent on ER. Thus, the activity of 4OHT in bone is likely to be a composite response requiring its actions on both ER and AHR.

Many new aspects of the estrogen and ER signaling pathways have been uncovered as we learn more about ligands that modulate ER by altering its conformation and thus its ability to engage in protein-protein interactions. Collectively, our findings demonstrate that the intersection between cholesterol metabolism, ER signaling, and the AHR pathway will have important consequences in regulating cellular function, and may be involved in the development or progression of multiple disease states.