Documenting Chile: Visualizing Identity and the National Body from Dictatorship to Post-Dictatorship 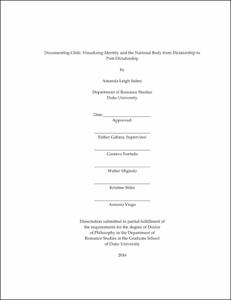 I study three contemporary Chilean works of visual culture that appropriate and re-assemble visual material, discourse, and atmosphere from the bureaucracy of the military state. I examine Diamela Eltit’s textual performance of legal discourse in Puño y letra (2005); Guillermo Núñez’s testimonial art Libertad Condicional (1979-1982) based on the documents pertaining to his imprisonment, parole and forced exile; and Pablo Larraín’s fictional film Post Mortem (2010) inspired by Salvador Allende’s autopsy report. I argue that they employ a framework that exposes both the functional and aesthetic modes of bureaucracy complicit in state terror that operate within the spectacular and the mundane. Furthermore, I trace bureaucracy’s origins from the founding of the nation to its current practices that enabled the societal conditions for dictatorship and continue to uphold dictatorial legacies into the present.

In my analysis, I engage theories from performance, legal and media studies to interpret how Eltit critiques the press coverage of human rights trials, Núñez informs institutionalized preservation of memory, and Larraín demonstrates the power of fiction in our documentary reconstruction of the past. I conclude by arguing that this examination of bureaucracy is imperative because state bureaucracy anchors vestiges of the dictatorship that persist into the present such as the dictatorship-era constitution and the newly revived preventative control of identity documentation law.