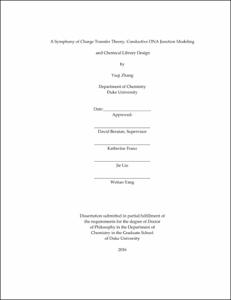 Biological electron transfer (ET) reactions are typically described in the framework of coherent two-state electron tunneling or multi-step hopping. Yet, these ET reactions may involve multiple redox cofactors in van der Waals contact with each other and with vibronic broadenings on the same scale as the energy gaps among the species. In this regime, fluctuations of the molecule and its medium can produce transient energy level matching among multiple electronic states. This transient degeneracy, or flickering electronic resonance among states, is found to support coherent (ballistic) charge transfer. Importantly, ET rates arising from a flickering resonance (FR) mechanism will decay exponentially with distance because the probability of energy matching multiple states is multiplicative. The distance dependence of FR transport thus mimics the exponential decay that is usually associated with electron tunneling, although FR transport involves real carrier population on the bridge and is not a tunneling phenomenon. Likely candidates for FR transport are macromolecules with ET groups in van der Waals contact: DNA, bacterial nanowires, multi-heme proteins, strongly coupled porphyrin arrays, and proteins with closely packed redox-active residues. The theory developed here is used to analyze DNA charge-transfer kinetics, and we find that charge transfer distances up to 3-4 bases may be accounted for with this mechanism. Thus, the observed rapid (exponential) distance dependence of DNA ET rates over distances of ≲10 Å does not necessarily prove a tunneling mechanism.

Molecular structures that direct charge transport in two or three dimensions could help to enable the development of molecule-based electrical switches and gates. As a step toward this goal, we use theory, modeling and simulation to explore DNA three-way junctions (TWJs). Molecular dynamics (MD) simulations and quantum calculations, indicate that DNA TWJs undergo dynamic interconversion among “well stacked” conformations on the time scale of nanoseconds, a feature that makes the junctions very different from linear DNA duplexes. The studies further indicate that this conformational gating would control charge flow through these TWJs, distinguishing them from conventional (larger size scale) gated devices. Simulations also find that structures with polyethylene glycol (PEG) linking groups (“extenders”) lock conformations that favor CT for 25 ns or more. The simulations explain the kinetics observed experimentally in TWJs and rationalize their transport properties compared to double-stranded DNA. Furthermore, we redesigned DNA TWJs that have equally coupled output pathways for charge. The TWJ was also designed to switch between the two conductive states in responsive to an applied electric field.

Computationally aided drug discovery confronts the problem to balance performance and computation cost. Earlier study reveals that a less-expensive docking approach is not reliable to estimate the protein-ligand affinity in exploring drug candidates targeting CARM1 (coactivator-associated arginine methyltransferase 1). However, more accurate binding free energy calculation based on molecular dynamics sampling is not affordable in a high throughput screening. A truncated MD method was developed and can be used to estimate the binding free energy with similar accuracy with the full-system MD methods, while reducing the computation cost ten fold. Thus, this truncated MD method is feasible in a high throughput screening towards drug discovery.