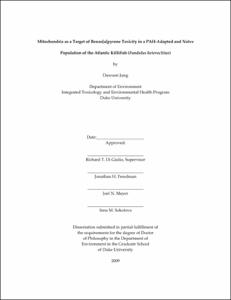 Polycyclic aromatic hydrocarbons (PAHs) are important contaminants that are found in increasing amounts in aquatic ecosystems. One of the sites that that is contaminated by extremely high levels of PAHs is the Atlantic Wood Industries Superfund Site on the Elizabeth River, VA. The Atlantic killifish (<italic>Fundulus heteroclitus</italic>) from this site exhibit increased levels of antioxidants, increased sensitivity to hypoxia, and increased expression of enzymes involved in glycolytic metabolism, suggesting that exposure to PAHs in the environment may induce changes in mitochondrial function and energy metabolism. Normal mitochondrial activity is crucial to an organism's survival. Therefore, gaining a better understanding of how mitochondria are affected by environmental contaminants such as PAHs is a pressing research objective. As a first step in understanding changes in cellular bioenergetics of aquatic organisms in response to PAHs, this research focused on the effect of benzo[a]pyrene (BaP), a representative PAH, on mitochondria the killifish model and on comparison of the mitochondria of the PAH-adapted killifish from the Elizabeth River Superfund Site to reference site fish. In order to assess the extent of mitochondrial DNA damage in the killifish, a PCR-based assay (LA-QPCR) for nuclear and mitochondrial DNA (nDNA, mtDNA) damage was adapted to this model and validated in with UV exposure and BaP exposure studies, as well as with <italic>ex situ</italic> study examining DNA damage in killifish inhabiting the Elizabeth River Superfund site. With the newly adapted LA-QPCR, mtDNA and nDNA damage in the killifish from the Elizabeth River Superfund site and from a reference site (King's Creek, VA) that were treated with BaP were examined. Similar increases in mitochondrial and nuclear DNA damage were observed in King's Creek fish treated with BaP. Killifish from the Elizabeth River showed high levels of basal nDNA and mtDNA damage compared to fish from the reference site, but the level of damage induced due to BaP treatment was much lower in Elizabeth River killifish. Laboratory-reared offspring from both populations showed increased BaP-induced damage in mtDNA, relative to nDNA. Similar to the adult experiment, the Elizabeth River larvae had higher levels of basal DNA damage than those from the reference site, but were less impacted by BaP exposure. Results suggest that BaP exposure can have important energetic consequences and that multi-generational exposure in the wild may lead to adaptation that dampens DNA damage arising from BaP exposure. Since the toxic effects of many PAHs are the result of bioactivation by cytochrome P4501A (CYP1A), the existence of enzymes that can potentially metabolize PAHs in mitochondria was verified. Using Western blot, protein similar in size to microsomal CYP1A was identified with monoclonal antibody against scup CYP1A in the mitochondrial fraction from adult male killifish livers. The size of the protein in the mitochondria was the similar to that of microsomal CYP1A. Fish dosed with BaP had increased EROD activity in the liver mitochondrial fraction compared to controls. In killifish larvae dosed with BaP and benzo[k]fluoranthene (BkF), CYP1A protein levels as well as enzyme activity were elevated. However, fish from the Elizabeth River Superfund site showed recalcitrant mitochondrial CYP1A protein levels and enzyme activity in a similar manner to microsomal CYP1A. Finally, the hypothesis that energy metabolism of BaP-treated fish may be different from the control group and that killifish from the Elizabeth River Superfund site may also have altered energy metabolism compared to reference site fish was tested. Respiration of killifish embryos treated with BaP from both populations was measured. Compared to the King's Creek control fish, all other treatment groups showed decrease in oxygen consumption, indicating lower respiration rate. However, when activities of key enzymes involved in glycolysis (PK) and anaerobic metabolism (LDH) in adult killifish liver and muscle were measured, no differences in the enzyme activities were observed in BaP-treated group compared to the control group. Moreover, metabolomic analysis on BaP treated King's Creek and Elizabeth River killifish showed no difference in the profile in all four treatment groups. The findings in this thesis contribute to the understanding of how BaP, a common environmental pollutant in the aquatic ecosystem, targets the mitochondria in fish model. Nevertheless, deeper examination of how BaP may impact mitochondrial function in killifish and potentially influence adaptation of killifish at a highly contaminated site is necessary. Further studies will elucidate whether such impacts can potentially affect the energy budget and organism level fitness in populations in the wild.