Injury Detection and Localization in the Spine using Acoustic Emission 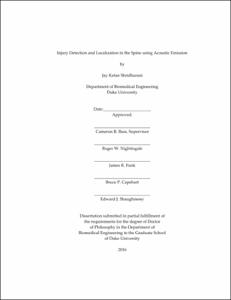 Acoustic emissions have been shown to be produced during micro-cracking of cortical bone (Kohn 1995). However, there has been minimal work utilizing acoustic emission to detect cortical and trabecular bone damage. The research in this dissertation developed experimental and analytic methods of sensitively assessing when failure (both micro-cracks and more extensive failures) occurs in the cervical spine using acoustic emissions.

The acoustic emissions from cortical and trabecular bone failure were characterized using a Welch power spectrum density estimate and continuous wavelet transform. The power spectrum density results showed both cortical bone and trabecular bone failure produced wideband acoustic emission signals with spectral peaks between from 20 kHz to 1380 kHz and 24 kHz to 1382 kHz respectively. The continuous wavelet transform showed the spectral content begins with high frequency content followed quickly by low frequency content, but the low frequency lasts for a longer time causing it to dominate the response in the Welch power spectrum density. The first frequency component in the continuous wavelet transform was used to characterize the signals and was found to form three distinct bands in the cortical bone tests (166 ± 52.6 kHz, 379 ± 37.2 kHz, and 668 ± 63.4 kHz) and one band in the trabecular bone tests (185 ± 37.9 kHz). Therefore, observing spectral content within these bands suggests failure of the respective bone.

This dissertation also uses continuous wavelet transform to identify failure in whole cervical spine compression tests. Whole cervical spines placed in a pre-flexed and pre-extended posture were compressed to induce failure while being monitored for acoustic emissions. Cortical bone failure was identified in the acoustic emissions when local maxima in the continuous wavelet transform fell within the spectral bands associated with cortical bone failure previously identified. The timing of these failures was matched to the force-displacement response to identify the initiation of failure and the major failure. Cortical bone failure was detected at 70-90% of the failure load suggesting that the failure occurs as an evolution from micro-cracks to the eventual major failure. Locating these micro-cracks before the major failure forms may be useful in the prediction of the location of failure.

This dissertation also presents a technique to calculate the AE source location for AEs generated from fracture. The primary obstacle for AE source localization in the spine is that the speed of sound is different in cortical bone (Prevrhal et al. 2001), trabecular bone (Cardoso et al. 2003), intervertebral disc (Pluijm et al. 2004), ligaments (Kijima et al. 2009), and also differs based on its direction of travel in cortical bone (Kann et al. 1993) and likely in the other materials. Any algorithm must account for these differences to obtain any useful level of accuracy. The algorithm presented in this dissertation is based on hyperbolic source location algorithms (De Ronde et al. 2007, O'Toole et al. 2012, Salinas et al. 2010) except that it iterates on the speed of sound over a specified range, and convergence is defined as when the solution change is minimized. This procedure calculated the AE source location with a mean error of 5.7 mm and a standard deviation of 3.8 mm.

The contributions and conclusions of this dissertation provide methodology and results to evaluate the failure mechanics in the spine. Although these procedures were developed for use in the spine, they are of great value to the biomechanics community because they are applicable to every body region. The recommendations presented will serve to better understand the failure mechanics of the human body and will likely lead to better defined and safer standards for protective equipment. It also provides data for the generation of finite element models that require failure criteria.