An Exploratory Study of Cell Growth and Division Data 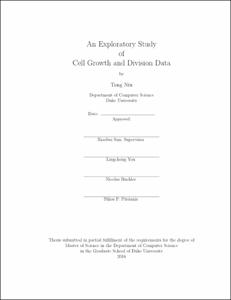 Understanding the mechanism behind cell-size control of bacteria such as E. coli has been an active research topic for decades. Until about 2010, most studies were limited to measurements at the cell population level. Recently advanced technologies and techniques, including Mother Machine and modern microscopic imaging, as well as new biological insights and experiment techniques have enabled measurements of cell growth and division at individual cell level with high spatial and temporal resolution. This unprecedented data allowed scientists to take a closer look into the patterns of cell growth and division, to search for new answers, and to gain a better understanding of the natural law governing cell growth. This thesis study is based on six data sets provided by the You lab at Duke University and by the Jun lab at University of California, San Diego. We focus on exploratory and quantitative study of inter-generation relationships among certain cell growth parameters and variables, including the variation in each relationship.

We report and describe three particular findings. (1) The variation in cell size at birth between two successive generations, i.e., mother and daughter generations, is better captured in two separate zones in the mother-daughter plane of initial cell size. This leads to a two-phase linear model with much narrower noise spread. The model can be used to connect or compensate for certain well-known models. (2) The variation in doubling time between two successive generations is confined in a finite region with non-uniform density. Specifically, the confining region is apparently triangular in the successive-generation plot of doubling time. The highest variation of doubling time in daughter-generation corresponds to the median for the mother- generation. This variation structure of successive-generation is further used to predict the variations in succeeding generations via an iterative simulation method. (3) The relationship between cell size and doubling time is studied with Fourier analysis. We found that the two dominant frequencies of the cell-size time series are nearly constant for each lineage. Furthermore, the top dominant frequency location is invariant under random re-ordering of generations. This invariance suggests that the dominant frequency is an intra-generation property, i.e., an inherent property. These findings are descriptive rather than explanatory. Nonetheless, they provide additional angles to examine, re-examine and improve our understanding of cell growth control mechanism. The findings also show, perhaps in a subtle way, the effect of computational concepts and techniques, which we used to probe into data on the finding, artifacts and their separation.