Mistaken Identity: Another Bias in the Use of Relative Genetic Divergence Measures for Detecting Interspecies Introgression 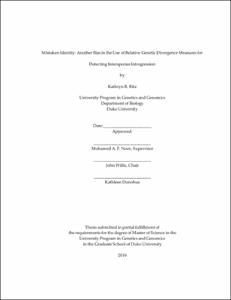 Measures of genetic divergence have long been used to identify evolutionary processes operating within and between species. However, recent reviews have described a bias in the use of relative divergence measures towards incorrectly identifying genomic regions that are seemingly immune to introgression. Here, we present a novel and opposite bias of relative divergence measures: misidentifying regions of introgression between sister species. We examine two distinct haplotypes of intermediate frequency within Drosophila pseudoobscura at the DPSX009 locus. One of these haplotypes had lower relative divergence than another to sister species D. persimilis. Although we and others initially presumed one haplotype have spread via introgression between D. pseudoobscura and D. persimilis, absolute divergence measures and individual sequence analysis suggest that haplotype structuring occurred as the result of within-species processes. The potential for this type of misinference may occur with any haplotype that recently spread within a species. We conclude that absolute measures of genetic divergence are necessary for confirming putative regions of introgression.