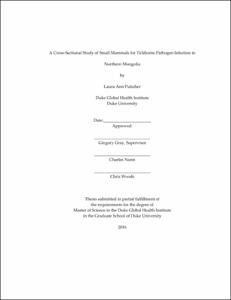 Introduction: Extensive studies on tickborne pathogens (TBPs) have been conducted in developed nations, relatively less has been done in developing nations leaving a large gap of knowledge. Mongolia, a country built upon nomadic culture and pastoralism is an ideal system to study TBPs as the population is at an increased risk due to increased time spent outside herding livestock. Discoveries of TBPs in Mongolia include Babesia spp., Anaplasma spp., Borrelia spp., Rickettsia spp. and tick-borne encephalitis virus. While research has focused on TBPs in humans and ticks in Mongolia, little research has assessed animal reservoirs, specifically small mammal species, as reservoirs for TBPs. This project aimed to 1) identify the role of small mammal species in the ecology of TBPs in Mongolia, specifically Rickettsia spp., Anaplasma spp., and Borrelia spp. using serological and molecular analysis and 2) identify risk factors associated with the prevalence of TBPs in small mammal populations in Mongolia.

Conclusion: The results of this study provide considerable evidence of TBPs circulating in small mammal populations in Northern Mongolia. Further information on TBPs in ticks, humans, livestock and wildlife reservoirs will be important to address public health interventions for TBPs in Mongolia in the future.