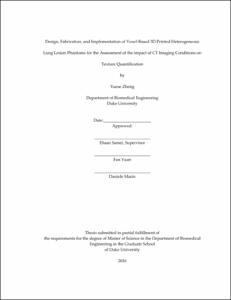 Realistic virtual lesion models are valuable in medical imaging applications including phantom design and observer studies. Radiologic diagnostic information rarely include lesion texture due to the fact that texture quantification is sensitive to changing imaging conditions. These effects are not well understood, in part, due to a lack of ground-truth phantoms with realistic textures. Internal tumor heterogeneity in nodules can be predictive of lesion malignancy but is not well understood and virtual lesion models will facilitate research in this area. The purpose of this study was to design and fabricate realistic virtual lung nodules with internal heterogeneity characteristics, and assess the variability as well as determine which imaging conditions provides the most accurate texture features compared to voxel-based 3D printed textured lesions for witch the true texture features are known.

We propose a texture synthesis method that accounts for the effects of the imaging system to mimic the appearance of texture in real nodules. Modulation Transfer Function blurring effects and noise contamination was included in the texture generation based on a 3D-Clustered Lumpy Background (3D-CLB). The governing parameters of the 3D-CLB were optimized using a Generic Algorithm with an objective function of Mahalanobis distance between synthesized textures and real lesion textures features. The resultant texture was objectively and visually similar to real nodules of the same heterogeneity category.