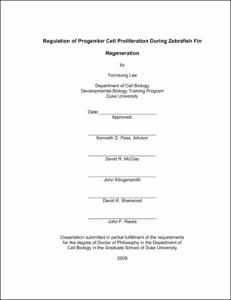 Vertebrates like urodele and teleost have an enhanced capacity for regeneration, when compared to mammals. Recently, the teleost zebrafish (Danio rerio) has become a popular model for studying regenerative events, due to the ability to regenerate multiple organs such as the fin and the heart, and the diverse genetic approaches available for functional studies. In my thesis studies, I have used the zebrafish caudal fin as a model system to understand molecular and cellular mechanism of appendage regeneration.

Pharmacological and genetic studies have revealed that Fgf signaling is important for appendage regeneration. To dissect the mechanism of Fgfs during zebrafish fin regeneration, lab colleagues and I have generated and utilized transgenic animals in which Fgf signaling can be experimentally increased or decreased. Through these transgenic studies, I found that position-dependent Fgf signaling directs regenerative growth and blastemal proliferation. Proximally-amputated fin regenerates grow at higher rates than the distally-amputated, owing to position-dependent amounts of Fgf activity. Further studies using new transgenics have provided an understanding of mechanisms by which Fgfs influence epidermal regulation of the blastema. Loss- and gain-of-function studies of Fgfs reveal that Fgf signaling both positively and negatively regulated shh expression in the epidermis to maintain blastemal function.

During the fin regeneration process, pigmentation pattern is re-established as along with bone structures and connective tissues. While the lineage of the blastema is not precisely clear, pigment cells in the fin regenerates are thought to be derived from melanocyte stem cells. Therefore, melanocyte regeneration is an informative system to understand the mechanism underlying regulation of adult stem cells during regeneration. As part of my thesis studies, we generated transgenic animals in which ectopic Ras expression can be experimentally induced. Transgenic studies, combined with pharmacological approaches, have revealed that Ras controls self-renewal of melanocyte stem cells during fin pigment regeneration.