Establishment and Regulation of Silenced Chromatin in Saccharomyces Cerevisiae 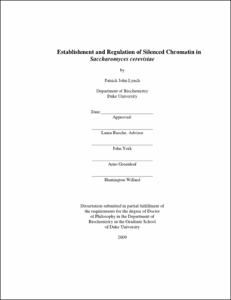 Heterochromatin, or condensed chromatin, is a transcriptionally repressive form of chromatin that occurs in many eukaryotic organisms. At its natural locations, heterochromatin is thought to play important roles in genome organization as well as gene expression. Just as important is the restriction of this repressive form of chromatin to appropriate regions of the genome. In the budding yeast <italic>Saccaromyces cerevisiae</italic>, domains of condensed, transcriptionally silenced chromatin are found at telomeres and at the silent-mating type cassettes, <italic>HML<italic/> and <italic>HMR</italic>. At these locations, a complex of Silent Information Regulator (SIR) proteins gets recruited to DNA through discrete silencer elements. Once recruited, the Sir protein complex then spreads along chromosomes in a step-wise manner. This process results in the silencing of gene expression. It is unclear whether silenced chromatin is established in the same manner at different genomic locations. Understanding how silenced chromatin is formed is important for determining how these chromatin structures are regulated.

The results of this thesis work provide new insights into the mechanisms of silenced chromatin establishment and regulation in budding yeast. I show here that the capacity of Sir proteins to assemble onto nucleosomes is inherently limited. Additionally, silencers vary in their ability to promote this assembly. I conclude that the silencer is a key factor in determining the relative size, efficiency, and location of silenced chromatin domains in the cell.