A Common Mechanism for Perceptual Reversals in Motion-Induced Blindness, the Troxler Effect, and Perceptual Filling-In. 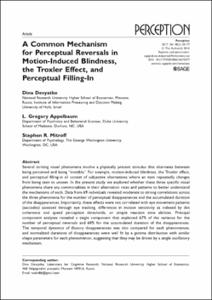 View / Download
868.0 Kb
Date
Authors
Devyatko, Dina
Appelbaum, L Gregory
Mitroff, Stephen R
Repository Usage Stats
202
views
202
downloads
Abstract
Several striking visual phenomena involve a physically present stimulus that alternates between being perceived and being "invisible." For example, motion-induced blindness, the Troxler effect, and perceptual filling-in all consist of subjective alternations where an item repeatedly changes from being seen to unseen. In the present study, we explored whether these three specific visual phenomena share any commonalities in their alternation rates and patterns to better understand the mechanisms of each. Data from 69 individuals revealed moderate to strong correlations across the three phenomena for the number of perceptual disappearances and the accumulated duration of the disappearances. Importantly, these effects were not correlated with eye movement patterns (saccades) assessed through eye tracking, differences in motion sensitivity as indexed by dot coherence and speed perception thresholds, or simple reaction time abilities. Principal component analyses revealed a single component that explained 67% of the variance for the number of perceptual reversals and 60% for the accumulated duration of the disappearances. The temporal dynamics of illusory disappearances was also compared for each phenomenon, and normalized durations of disappearances were well fit by a gamma distribution with similar shape parameters for each phenomenon, suggesting that they may be driven by a single oscillatory mechanism.
Type
Journal article
Subject
Troxler effect
common timing mechanism
gamma approximation
motion-induced blindness
perceptual filling-in
Permalink
https://hdl.handle.net/10161/13523
Published Version (Please cite this version)
10.1177/0301006616672577
Publication Info
Devyatko, Dina; Appelbaum, L Gregory; & Mitroff, Stephen R (2016). A Common Mechanism for Perceptual Reversals in Motion-Induced Blindness, the Troxler Effect, and Perceptual Filling-In. Perception. 10.1177/0301006616672577. Retrieved from https://hdl.handle.net/10161/13523.
This is constructed from limited available data and may be imprecise. To cite this article, please review & use the official citation provided by the journal.
Collections
More Info
Show full item record Associate Research Professor in the Department of Psychology and Neuroscience
NOTE: As of 8/1/2015 Dr. Mitroff and his lab will move to The George Washington University in Washington D.C. Lab focus: My lab has an active interest in visual search—how we find targets amongst distractors. With a dual goal of informing both academic theory and applied "real-world" performance, we explore various influences on search. We work with a variety of expert groups to understand the effects of experience and expertise, and to reveal individual differences in performa
Alphabetical list of authors with Scholars@Duke profiles.