Pinning down response inhibition in the brain--conjunction analyses of the Stop-signal task. 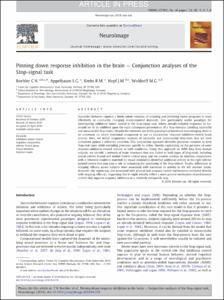 View / Download
764.7 Kb
Date
Authors
Boehler, CN
Appelbaum, LG
Krebs, RM
Hopf, JM
Woldorff, MG
Repository Usage Stats
175
views
192
downloads
Abstract
Successful behavior requires a finely-tuned interplay of initiating and inhibiting motor programs to react effectively to constantly changing environmental demands. One particularly useful paradigm for investigating inhibitory motor control is the Stop-signal task, where already-initiated responses to Go-stimuli are to be inhibited upon the rapid subsequent presentation of a Stop-stimulus (yielding successful and unsuccessful Stop-trials). Despite the extensive use of this paradigm in functional neuroimaging, there is no consensus on which functional comparison to use to characterize response-inhibition-related brain activity. Here, we utilize conjunction analyses of successful and unsuccessful Stop-trials that are each contrasted against a reference condition. This conjunction approach identifies processes common to both Stop-trial types while excluding processes specific to either, thereby capitalizing on the presence of some response-inhibition-related activity in both conditions. Using this approach on fMRI data from human subjects, we identify a network of brain structures that was linked to both types of Stop-trials, including lateral-inferior frontal and medial frontal cortical areas and the caudate nucleus. In addition, comparisons with a reference condition matched for visual stimulation identified additional activity in the right inferior parietal cortex that may play a role in enhancing the processing of the Stop-stimuli. Finally, differences in stopping efficacy across subjects were associated with variations in activity in the left anterior insula. However, this region was also associated with general task accuracy (which furthermore correlated directly with stopping efficacy), suggesting that it might actually reflect a more general mechanism of performance control that supports response inhibition in a relatively nonspecific way.
Type
Journal article
Subject
Adult
Cerebral Cortex
Cognition
Cues
Female
Humans
Male
Movement
Neural Inhibition
Visual Perception
Permalink
https://hdl.handle.net/10161/13534
Published Version (Please cite this version)
10.1016/j.neuroimage.2010.04.276
Publication Info
Boehler, CN; Appelbaum, LG; Krebs, RM; Hopf, JM; & Woldorff, MG (2010). Pinning down response inhibition in the brain--conjunction analyses of the Stop-signal task. Neuroimage, 52(4). pp. 1621-1632. 10.1016/j.neuroimage.2010.04.276. Retrieved from https://hdl.handle.net/10161/13534.
This is constructed from limited available data and may be imprecise. To cite this article, please review & use the official citation provided by the journal.
Collections
More Info
Show full item record