Gene expression signatures of radiation response are specific, durable and accurate in mice and humans. 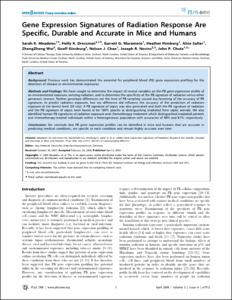 Donald D. and Elizabeth G. Cooke Cancer Distinguished Research Professor
My research interests are in two broad areas, clinical hematopoietic stem cell and cord blood transplantation and in the laboratory studies related to graft vs. host disease and immune reconstitution. On the clinical side we are currently conducting approximately 50 different clinical protocols ranging from preparatory regimens, supportive care studies and disease specific protocols. Most of these clinical studies are centered around studies of the sources of stem cells and the methods to

Adjunct Professor in the Department of Medicine Professor of Medicine
Dr. Geoffrey S. Ginsburg's research interests are in the development of novel paradigms for developing and translating genomic information into medical practice and the integration of personalized medicine into health care.
Alphabetical list of authors with Scholars@Duke profiles.