The Role of Seedling Pathogens in Temperate Forest Dynamics 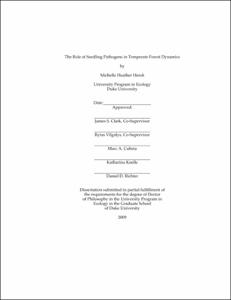 Fungal pathogens likely play an important role in regulating populations of tree seedlings and preserving forest diversity, due to their ubiquitous presence and differential effects on survival. Host-specific mortality from natural enemies is one of the most widely tested hypotheses in community ecology to explain the high biodiversity of forests. The effects of fungal pathogens on seedling survival are usually discussed under the framework of the Janzen-Connell (JC) hypothesis, which posits that seedlings are more likely to survive when dispersed far from the parent tree or at low densities due to pressure from host-specific pathogens (Janzen 1970, Connell 1971). One of the key challenges to assessing the importance of JC effects has been to identify and quantify the effects of the large numbers of potential pathogens required to maintain host diversity. The primary objectives of this research were to (1) characterize the fungi associated with seedling disease and mortality for a number of important southeastern US forest tree species; and (2) determine if these associations are consistent with the Janzen-Connell hypothesis in terms of differential effects on seedling survival.<br>

Culture-based methods and ribosomal DNA (rDNA) sequencing were used to characterize the fungal community in recently dead and live seedlings of thirteen common tree species in a temperate mixed hardwood forest (North Carolina, USA), with the goal of identifying putative seedling pathogens. Cultures were initially classified and grouped into 130 operational taxonomic units (OTUs) using 96% internal transcribed spacer (ITS) sequence similarity; 46% of all OTUs were found only once. Using rarefaction, it was concluded that the richness of the system was not fully sampled and likely included over 200 taxa (based on non-parametric richness estimators). Species richness did not differ between sampling sites or among the five most common hosts sampled. The large ribosomal subunit (LSU) region of rDNA was then sequenced for representative samples of common OTUs and refined identifications using a constrained maximum likelihood phylogenetic analysis. Phylogenetic placement verified strong BLAST classifications, and allowed for placement of unknown taxa to the order level, with many of these unknowns placed in the Leotiomycetes and Xylariales (Sordariomycetes).<br>

Next, a hierarchical Bayesian model was developed to predict the effects of multiple putative fungal pathogens on individual seedling survival, without forcing the effects of multiple fungi to be additive. The process of disease was partitioned into a chain of events including incidence, infection, detection, and survival, and conditional probabilities were used to quantify each component individually, but in the context of one another. The use of this modeling approach was illustrated by examining the effects of two putative fungal pathogens, <italics>Colletotrichum acutatum</italics> and <italics>Cylindrocarpon</italics> sp. A, an undescribed species of <italics>Cylindrocarpon</italics>, on the survival of five seedling hosts in both a maximum likelihood and Bayesian framework.<br>

Finally, the model was used to assess the impacts of these fungi on seedling survival, alone and in combination, using data on five potential fungal pathogens and five hosts. Multi-host fungi had differential effects on seedling survival depending on host identity, and multiple infections may impact survival even when single infections do not. Evaluating these interactions among multiple plant and fungal species generates a set of targeted hypotheses of specific plant-fungal combinations that could help us better understand pathogen-driven diversity maintenance at larger scales than previously possible. Building on these results, some recommendations are provided as to how the Janzen-Connell hypothesis can be re-evaluated with respect to host specificity, pathogen distribution, and environmental context.