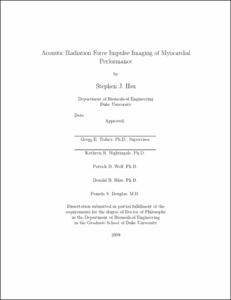 Cardiovascular disease is the leading cause of death for developed countries, including the United States. In order to diagnose and detect certain cardiac diseases, it is necessary to assess myocardial performance and function. One mechanical property that has been shown to reflect myocardial performance is myocardial stiffness. Acoustic radiation force impulse (ARFI) imaging has been demonstrated to be capable of visualizing variations in local stiffness within soft tissue.

In this thesis, the initial investigations into the visualization of myocardial performance with ARFI imaging are presented. <italic>In vivo</italic> ARFI images were acquired with a linear array placed on exposed <italic>canine</italic> hearts. When co-registered with the electrocardiogram (ECG), ARFI images of the heart reflected the expected changes in myocardial stiffness through the cardiac cycle. With the implementation of a quadratic motion filter, motion artifacts within the ARFI images were reduced to below 1.5 &mu m at all points of the cardiac cycle. The inclusion of pre-excitation displacement estimates in the quadratic motion filter further reduced physiological motion artifacts at all points of the cardiac cycle to below 0.5 &mu m.

In order for cardiac ARFI imaging to more quantitatively assess myocardial performance, novel ARFI imaging sequences and methods were developed to address challenges specifically related to cardiac imaging. These improvements provided finer sampling and improved spatial and temporal resolution within the ARFI images. <italic>In vivo</italic> epicardial ARFI images of an <italic>ovine</italic> heart were formed using these sequences, and the quality and utility of the resultant ARFI-induced displacement curves were examined.

<italic>In vivo</italic> cardiac ARFI images were formed of <italic>canine</italic> left ventricular free walls while the hearts were externally paced by one of two electrodes positioned epicardially on either side of the imaging plane. Directions and speeds of myocardial stiffness propagation were measured within the ARFI imaging field of view. In all images, the myocardial stiffness waves were seen to be traveling away from the stimulating electrode. The stiffness propagation velocities were also shown to be consistent with propagation velocities measured from elastography and tissue velocity imaging as well as the local epicardial ECG.

ARFI-induced displacement curves of an <italic>ovine</italic> heart were formed and temporally registered with left ventricular pressure and volume measurements. From these plots, the synchronization of myocardial stiffening and relaxation with the four phases (isovolumic contraction, ejection, isovolumic relaxation, and filling) of the cardiac cycle was determined. These ARFI imaging sequences were also used to correlate changes in left ventricular performance with changes in myocardial stiffness. These preliminary results indicated that changes in the ARFI imaging-derived stiffnesses were consistent with those predicted by current, clinically accepted theories of myocardial performance and function.

These results demonstrate the ability of ARFI imaging to visualize changes in myocardial stiffness through the cardiac cycle and its feasibility to provide clinically useful insight into myocardial performance.