Ligand Bias by the Endogenous Agonists of CCR7 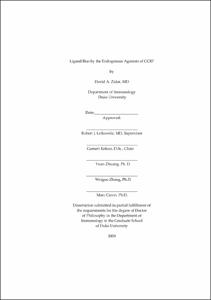 In order to test whether these ligands have distinct activity, murine T lymphocytes were used to compare the effects of CCL19 and CCL21 activation of CCR7 at endogenous expression levels. While each ligand stimulates similar chemotactic responses, we also find that CCR7 ligands lead to differential signaling. For instance, CCL19 is markedly more efficacious than CCL21 for the activation of ERK and JNK, but not AKT in these cells. Furthermore, ERK activation and chemotaxis are maintained as separate pathways, also distinguishable by their dependency upon PKC and PI3 kinase, respectively. Thus, CCL19 and CCL21 stimulate equal activation of PI3 kinase, AKT, and chemotaxis, but are in fact biased agonists leading to differential activation of MAP kinase in murine T lymphocytes.

To determine the mechanism of CCR7 ligand bias, we used HEK-293 cells expressing CCR7 to compare the proximate signaling events following CCL19 and CCL21 activation. We found striking differences in the activation of the GRK/ b-arrestin system. CCL19 leads to robust CCR7 phosphorylation and b-arrestin2 recruitment catalyzed by both GRK3 and GRK6 while CCL21 activates GRK6 alone. This differential GRK activation leads to distinct functional consequences. Only CCL19 leads to the recruitment of b-arrestin2-GFP into endocytic vesicles and classical receptor desensitization. In contrast, each agonist is fully capable of signaling to MAP kinase through b-arrestin2 in a GRK6 dependent fashion.

Therefore, CCR7 and its ligands represent a natural example of ligand bias whose mechanism involves differential GRK isoform utilization by CCL19 and CCL21 despite similar G-protein signaling. This study suggests that the GRK signatures of 7TMRs can determine the function of discrete pools of b-arrestin and thus guide its cellular effects.