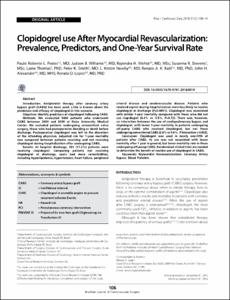 View / Download
258.9 Kb
Date
Authors
Prates, Paulo Roberto L
Williams, Judson B
Mehta, Rajendra H
Stevens, Susanna R
Thomas, Laine
Smith, Peter K
Newby, L Kristin
Kalil, Renato AK
Alexander, John H
Lopes, Renato D
Show More
(10 total)
Repository Usage Stats
166
views
126
downloads
Abstract
INTRODUCTION: Antiplatelet therapy after coronary artery bypass graft (CABG) has been used. Little is known about the predictors and efficacy of clopidogrel in this scenario. OBJECTIVE: Identify predictors of clopidogrel following CABG. METHODS: We evaluated 5404 patients who underwent CABG between 2000 and 2009 at Duke University Medical Center. We excluded patients undergoing concomitant valve surgery, those who had postoperative bleeding or death before discharge. Postoperative clopidogrel was left to the discretion of the attending physician. Adjusted risk for 1-year mortality was compared between patients receiving and not receiving clopidogrel during hospitalization after undergoing CABG. RESULTS: At hospital discharge, 931 (17.2%) patients were receiving clopidogrel. Comparing patients not receiving clopidogrel at discharge, users had more comorbidities, including hyperlipidemia, hypertension, heart failure, peripheral arterial disease and cerebrovascular disease. Patients who received aspirin during hospitalization were less likely to receive clopidogrel at discharge (P≤0.0001). Clopidogrel was associated with similar 1-year mortality compared with those who did not use clopidogrel (4.4% vs. 4.5%, P=0.72). There was, however, an interaction between the use of cardiopulmonary bypass and clopidogrel, with lower 1-year mortality in patients undergoing off-pump CABG who received clopidogrel, but not those undergoing conventional CABG (2.6% vs 5.6%, P Interaction = 0.032). CONCLUSION: Clopidogrel was used in nearly one-fifth of patients after CABG. Its use was not associated with lower mortality after 1 year in general, but lower mortality rate in those undergoing off-pump CABG. Randomized clinical trials are needed to determine the benefit of routine use of clopidogrel in CABG.
Type
Journal article
Permalink
https://hdl.handle.net/10161/13607
Published Version (Please cite this version)
10.5935/1678-9741.20160019
Publication Info
Prates, Paulo Roberto L; Williams, Judson B; Mehta, Rajendra H; Stevens, Susanna R; Thomas, Laine; Smith, Peter K; ... Lopes, Renato D (2016). Clopidogrel use After Myocardial Revascularization: Prevalence, Predictors, and One-Year Survival Rate. Braz J Cardiovasc Surg, 31(2). pp. 106-114. 10.5935/1678-9741.20160019. Retrieved from https://hdl.handle.net/10161/13607.
This is constructed from limited available data and may be imprecise. To cite this article, please review & use the official citation provided by the journal.
Collections
More Info
Show full item record Consulting Professor in the Department of Medicine Professor of Medicine
Research Description General Focus: Clinical investigation the process and treatment of acute and chronic coronary artery disease and systems issues for delivery of care to patients with these illnesses. Particular interests include management of patients with chest pain and unstable angina, evaluation of the use of biochemical markers other than CK-MB for diagnosis and risk stratification in these patients, issues related to coronary artery disease in women, and systems issues Mary and Deryl Hart Distinguished Professor of Surgery, in the School of Medicine
Dr. Smith is the Prinicpal Investigator for the Duke site in the Cardiothoracic Surgery Clinical Trials Network (CTSN) and in recent years has focused his research efforts in clinical research. The CTSN is an NHLBI sponsored network developed to promote clinical research in cardiac surgery, and is now entering its 7th year of funding with a commitment now for an additional 5 years. Dr. Smith is the national PI for a randomized clinical trial comparing CABG alone to CABG with mitral repair f Assistant Consulting Professor in the Department of Surgery
"A North Carolina native, Dr. Williams believes in the mission of providing the best cardiovascular care that can be found in the world in his home state through WakeMed Health and Hospitals, Duke Health, and the HeartCare Plus collaborative. He feels fortunate to be part of the Heart Center because of the unique way he and his colleagues including anesthesiologists, physician assistants, surgical and heart center nurses, intensivists, and many others commit to individual pat
More Authors
Alphabetical list of authors with Scholars@Duke profiles.