Coming Home: A Historical Assessment of Private Domestic Space as the Primary Locus of Christian Hospitality 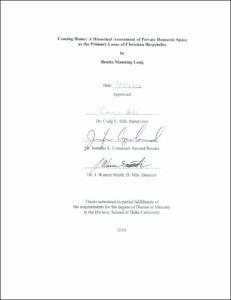 Coming Home: A Historical Assessment of Private Domestic Space as the Primary Locus of Christian Hospitality

Contemporary Christian individuals and institutions seeking direction in a post-Constantinian world have begun turning to the earliest communities of faith for guidance. Theologians, scholars, ecclesial leaders, and laity alike are finding that the concept of hospitality frequently surfaces as an integral dynamic of Christian communal identity, discipleship, and Gospel transmission. They consistently argue that hospitality is a necessary component of Christian life and that it represents a lost discipline worthy of reclaiming. This thesis builds on previous work by arguing that not just in the beginning, but in every epoch of Christian faith, private domestic space has provided the most suitable and effective environment for such practices. Therefore, if there is hope to be found in reclaiming the discipline of hospitality, the home must be restored as integral to the concept. If private domestic space as the primary locus of hospitality disappears from the Christian cultural landscape, the essential and most basic model of the dynamic will disappear with it. Evidence will confirm that throughout its entire history, although in varying degrees, hospitality has served as a central tenet, a consistent thread, and an ongoing leitmotif of Christian faith and witness. It will be established that its ultimate expression has consistently been found in the intimacy of the personal home, and it is this environment that has most effectively provided a recognizable paradigm for various manifestations of the dynamic. The image of hospitality being offered and/or withheld can be found in numerous areas of human endeavor. The concept emerges politically, socially, economically, and theologically. Thus the question is begged of Christians, “What are the implications of a diminished and weakened physical, incarnational, home-based hospitality, and how might history offer the help necessary in restoring its authenticity?”

Because readers are encouraged to rethink Christian hospitality as a lost legacy whose original potency has diminished over the course of history, each epoch will be deconstructed, examined and analyzed for clues as to when, how, and why this change occurred. What will emerge are clear and continuous patterns of activity and behavior, patterns that only a historical perspective can bring to light. The evidence, consisting of over one hundred books, peer reviewed articles, and primary sources will not be presented as a simple chronology of “proofs.” In some instances, literary metaphor is considered an acceptable form of persuasion whereas in others concrete models and paradigms are more effective tools. Whereas dozens of voices will enrich the conversation of some periods, individual life models will dominate the discussion of others. Early evidence will not necessarily represent Eastern or Western Christianity, but as the faith expands, geography will become more of a factor. Some evidence is historically accurate; some is ancient but venerated hagiography.

The conclusion of the paper is that although the centrality of private domestic space has clearly declined, there are signs of hope for the recovery of authentic home-based Christian hospitality, as communities of worship and individuals alike are encouraged to seek and find inspiration in successful past practices.