Transfer of human chromosomes via human minisegregant cells into mouse cells and the quantitation of the expression of hypoxanthine phosphoribosyltransferase in the hybrids. 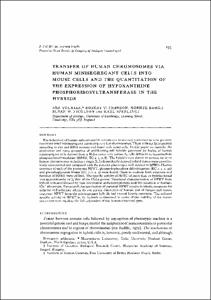 View / Download
1.8 Mb
Date
Authors
Tourian, A
Johnson, RT
Burg, K
Nicolson, SW
Sperling, K
Repository Usage Stats
72
views
77
downloads
Abstract
The behaviour of human cells arrested in mitosis can be severely perturbed so as to generate numerous small minisegregants containing very few chromosomes. These cells can be separated according to size and DNA content and fused with intact cells. In this paper we describe the production and some properties of proliferating cell hybrids generated by fusion of human minisegregant cells derived from a HeLa strain with mouse A9 cells deficient in hypoxanthine phosphoribosyltransferase (HPRT, EC 2.4.2.8). The hybrids were shown to contain up to 10 human chromosomes including a single X. Independently derived hybrid clones were quantitatively characterized and compared with the parental phenotypes with respect to HPRT. Human isozymes of each of the 3 enzymes HPRT, glucose-6-phosphate dehydrogenase (EC 1.1.1.49) and phosphoglycerate kinase (EC 2,7.2.3) were found. Tests to evaluate both structure and function of HPRT were utilized. The specific activity of HPRT of more than 10 hybrids tested was approximately 10% that of the HeLa parent. Structural characterization of HPRT from hybrid cells as evidenced by heat inactivation and electrophoretic mobility results in a 'human-like' phenotype. Functional characterization of parental HPRT results in kinetic constants for cofactor and substrate which do not permit distinction of human and of human and mouse enzymes; HPRT from the minisegregant hybrids had normal kinetic constants. The reduced specific activity of HPRT in the hybrids is discussed in terms of the inability of the mouse environment to regulate the full expression of the human structural gene.
Type
Journal article
Subject
Animals
Cell Division
Chromosomes, Human
Electrophoresis
Glucosephosphate Dehydrogenase
HeLa Cells
Hot Temperature
Humans
Hybrid Cells
Hypoxanthine Phosphoribosyltransferase
Kinetics
Mice
Mice, Inbred A
Permalink
https://hdl.handle.net/10161/13627
Collections
More Info
Show full item record