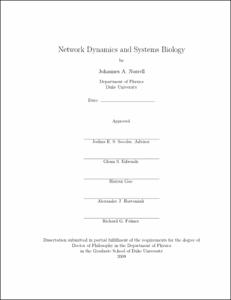 The physics of complex systems has grown considerably as a field in recent decades, largely due to improved computational technology and increased availability of systems level data. One area in which physics is of growing relevance is molecular biology. A new field, systems biology, investigates features of biological systems as a whole, a strategy of particular importance for understanding emergent properties that result from a complex network of interactions. Due to the complicated nature of the systems under study, the physics of complex systems has a significant role to play in elucidating the collective behavior.

In this dissertation, we explore three problems in the physics of complex systems, motivated in part by systems biology. The first of these concerns the applicability of Boolean models as an approximation of continuous systems. Studies of gene regulatory networks have employed both continuous and Boolean models to analyze the system dynamics, and the two have been found produce similar results in the cases analyzed. We ask whether or not Boolean models can generically reproduce the qualitative attractor dynamics of networks of continuously valued elements. Using a combination of analytical techniques and numerical simulations, we find that continuous networks exhibit two effects -- an asymmetry between on and off states, and a decaying memory of events in each element's inputs -- that are absent from synchronously updated Boolean models. We show that in simple loops these effects produce exactly the attractors that one would predict with an analysis of the stability of Boolean attractors, but in slightly more complicated topologies, they can destabilize solutions that are stable in the Boolean approximation, and can stabilize new attractors.

Second, we investigate ensembles of large, random networks. Of particular interest is the transition between ordered and disordered dynamics, which is well characterized in Boolean systems. Networks at the transition point, called critical, exhibit many of the features of regulatory networks, and recent studies suggest that some specific regulatory networks are indeed near-critical. We ask whether certain statistical measures of the ensemble behavior of large continuous networks are reproduced by Boolean models. We find that, in spite of the lack of correspondence between attractors observed in smaller systems, the statistical characterization given by the continuous and Boolean models show close agreement, and the transition between order and disorder known in Boolean systems can occur in continuous systems as well. One effect that is not present in Boolean systems, the failure of information to propagate down chains of elements of arbitrary length, is present in a class of continuous networks. In these systems, a modified Boolean theory that takes into account the collective effect of propagation failure on chains throughout the network gives a good description of the observed behavior. We find that propagation failure pushes the system toward greater order, resulting in a partial or complete suppression of the disordered phase.

Finally, we explore a dynamical process of direct biological relevance: asymmetric cell division in <italic>A. thaliana</italic>. The long term goal is to develop a model for the process that accurately accounts for both wild type and mutant behavior. To contribute to this endeavor, we use confocal microscopy to image roots in a SHORTROOT inducible mutant. We compute correlation functions between the locations of asymmetrically divided cells, and we construct stochastic models based on a few simple assumptions that accurately predict the non-zero correlations. Our result shows that intracellular processes alone cannot be responsible for the observed divisions, and that an intercell signaling mechanism could account for the measured correlations.