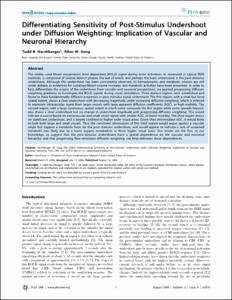 View / Download
264.8 Kb
Date
Authors
Harshbarger, Todd B
Song, Allen W
Repository Usage Stats
150
views
94
downloads
Abstract
The widely used blood oxygenation level dependent (BOLD) signal during brain activation, as measured in typical fMRI methods, is composed of several distinct phases, the last of which, and perhaps the least understood, is the post-stimulus undershoot. Although this undershoot has been consistently observed, its hemodynamic and metabolic sources are still under debate, as evidences for sustained blood volume increases and metabolic activities have been presented. In order to help differentiate the origins of the undershoot from vascular and neuronal perspectives, we applied progressing diffusion weighting gradients to investigate the BOLD signals during visual stimulation. Three distinct regions were established and found to have fundamentally different properties in post-stimulus signal undershoot. The first region, with a small but focal spatial extent, shows a clear undershoot with decreasing magnitude under increasing diffusion weighting, which is inferred to represent intravascular signal from larger vessels with large apparent diffusion coefficients (ADC), or high mobility. The second region, with a large continuous spatial extent in which some surrounds the first region while some spreads beyond, also shows a clear undershoot but no change in undershoot amplitude with progressing diffusion weighting. This would indicate a source based on extravascular and small vessel signal with smaller ADC, or lower mobility. The third region shows no significant undershoot, and is largely confined to higher order visual areas. Given their intermediate ADC, it would likely include both large and small vessels. Thus the consistent observation of this third region would argue against a vascular origin but support a metabolic basis for the post-stimulus undershoot, and would appear to indicate a lack of sustained metabolic rate likely due to a lower oxygen metabolism in these higher visual areas. Our results are the first, to our knowledge, to suggest that the post-stimulus undershoots have a spatial dependence on the vascular and neuronal hierarchy, and that progressing flow-sensitized diffusion weighting can help delineate these dependences.
Type
Journal article
Subject
Blood Flow Velocity
Blood Vessels
Brain
Brain Mapping
Cerebrovascular Circulation
Humans
Magnetic Resonance Imaging
Neurons
Oxygen
Photic Stimulation
Signal Transduction
Permalink
https://hdl.handle.net/10161/13718
Published Version (Please cite this version)
10.1371/journal.pone.0002914
Publication Info
Harshbarger, Todd B; & Song, Allen W (2008). Differentiating sensitivity of post-stimulus undershoot under diffusion weighting: implication of vascular and neuronal hierarchy. PLoS One, 3(8). pp. e2914. 10.1371/journal.pone.0002914. Retrieved from https://hdl.handle.net/10161/13718.
This is constructed from limited available data and may be imprecise. To cite this article, please review & use the official citation provided by the journal.
Collections
More Info
Show full item record

Medical Center Instructor in the Center for Brain Imaging and Analysis Professor in Radiology
The research in our lab is concerned with advancing structural and functional MRI methodologies (e.g. fast and high-resolution imaging techniques) for human brain imaging. We also aim to improve our understanding of functional brain signals, including spatiotemporal characterizations of the blood oxygenation level dependent contrast and alternative contrast mechanisms that are more directly linked to the neuronal activities. Additional effort is invested in applying and validating the de
Alphabetical list of authors with Scholars@Duke profiles.