The Impact of Rising Gasoline Prices on US Public Transit Ridership 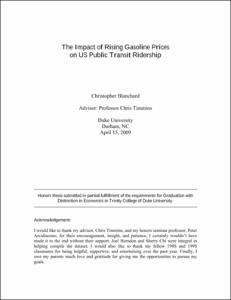 View / Download
162.7 Kb
Date
Author
Blanchard, Christopher
Repository Usage Stats
997
views
3,999
downloads
Abstract
This paper analyzes the impact of increasing fuel prices on public transit ridership in the United States. Using regional gasoline prices and transit ridership and supply figures from 218 US cities from 2002 to 2008, I estimate the cross-price elasticity of demand for four modes of transit with respect to gasoline price. I report how these estimates vary between cities and test to see if these cross-price elasticities have changed over time. I find a cross-price elasticity of transit demand with respect to gasoline price ranging from -0.012 to 0.213 for commuter rail, -0.377 to 0.137 for heavy rail, -0.103 to 0.507 for light rail, and 0.047 to 0.121 for bus. These estimates vary significantly between cities but are not highly correlated with urban population size. Additionally, I find evidence suggesting that the cross-price elasticity has increased over this time period for commuter rail, light rail, and motorbus transit.
Type
Honors thesis
Department
Economics
Permalink
https://hdl.handle.net/10161/1379
Citation
Blanchard, Christopher (2009). The Impact of Rising Gasoline Prices on US Public Transit Ridership. Honors thesis, Duke University. Retrieved from https://hdl.handle.net/10161/1379.
Collections
More Info
Show full item record