Immigrants in the one percent: The national origin of top wealth owners. 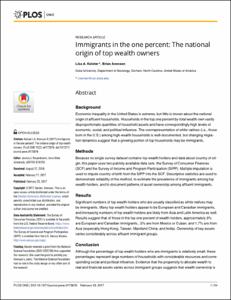 View / Download
542.0 Kb
Date
Authors
Keister, Lisa A
Aronson, Brian
Repository Usage Stats
176
views
140
downloads
Abstract
BACKGROUND: Economic inequality in the United States is extreme, but little is known about the national origin of affluent households. Households in the top one percent by total wealth own vastly disproportionate quantities of household assets and have correspondingly high levels of economic, social, and political influence. The overrepresentation of white natives (i.e., those born in the U.S.) among high-wealth households is well-documented, but changing migration dynamics suggest that a growing portion of top households may be immigrants. METHODS: Because no single survey dataset contains top wealth holders and data about country of origin, this paper uses two publicly-available data sets: the Survey of Consumer Finances (SCF) and the Survey of Income and Program Participation (SIPP). Multiple imputation is used to impute country of birth from the SIPP into the SCF. Descriptive statistics are used to demonstrate reliability of the method, to estimate the prevalence of immigrants among top wealth holders, and to document patterns of asset ownership among affluent immigrants. RESULTS: Significant numbers of top wealth holders who are usually classified as white natives may be immigrants. Many top wealth holders appear to be European and Canadian immigrants, and increasing numbers of top wealth holders are likely from Asia and Latin America as well. Results suggest that of those in the top one percent of wealth holders, approximately 3% are European and Canadian immigrants, .5% are from Mexico or Cuban, and 1.7% are from Asia (especially Hong Kong, Taiwan, Mainland China, and India). Ownership of key assets varies considerably across affluent immigrant groups. CONCLUSION: Although the percentage of top wealth holders who are immigrants is relatively small, these percentages represent large numbers of households with considerable resources and corresponding social and political influence. Evidence that the propensity to allocate wealth to real and financial assets varies across immigrant groups suggests that wealth ownership is more global than previous research suggests and that immigrant groups are likely to become more prevalent in top wealth positions in the U.S. As the representation of immigrants in top wealth positions grows, their economic, social, and political influence is likely to increase as well.
Type
Journal article
Permalink
https://hdl.handle.net/10161/13808
Published Version (Please cite this version)
10.1371/journal.pone.0172876
Publication Info
Keister, Lisa A; & Aronson, Brian (2017). Immigrants in the one percent: The national origin of top wealth owners. PLoS One, 12(2). pp. e0172876. 10.1371/journal.pone.0172876. Retrieved from https://hdl.handle.net/10161/13808.
This is constructed from limited available data and may be imprecise. To cite this article, please review & use the official citation provided by the journal.
Collections
More Info
Show full item record Professor of Sociology
Lisa A. Keister is professor of sociology and public policy at Duke University and an affiliate of the Duke Network Analysis Center and the Duke Population Research Initiative. Her current research focuses on organization strategy, elite households, the processes that explain extremes in wealth and income inequality, and on group differences in the intergenerational transfer of assets. She has been focusing on the causes and consequences of net worth poverty recently with colleagues from the
Alphabetical list of authors with Scholars@Duke profiles.