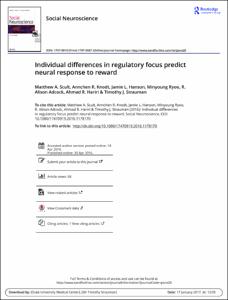 Associate Professor of Psychiatry and Behavioral Sciences
Dr. Adcock received her undergraduate degree in psychology from Emory University and her MD and PhD in Neurobiology from Yale University.  She completed her psychiatry residency training at Langley Porter Psychiatric Institute at UC-San Francisco and did neurosciences research as a postdoctoral fellow at UC-SF, the San Francisco VA Medical Center, and Stanford before joining the Duke faculty in 2007. Her work has been funded by NIDA, NIMH, NSF and Alfred P. Sloan and Klingenstein Fellows Professor of Psychology and Neuroscience
Integrating psychology, neuroimaging, pharmacology and molecular genetics in the search for biological pathways mediating individual differences in behavior and related risk for psychopathology. Professor of Psychology and Neuroscience
Professor Strauman's research focuses on the psychological and neurobiological processes that enable self-regulation, conceptualized in terms of a cognitive/motivational perspective, as well as the relation between self-regulation and affect. Particular areas of emphasis include: (1) conceptualizing self-regulation in terms of brain/behavior motivational systems; (2) the role of self-regulatory cognitive processes in vulnerability to depression and other disorders; (3) the impact of tre
Alphabetical list of authors with Scholars@Duke profiles.