A Fluorescence-Guided Laser Ablation System for Removal of Residual Cancer in a Mouse Model of Soft Tissue Sarcoma. 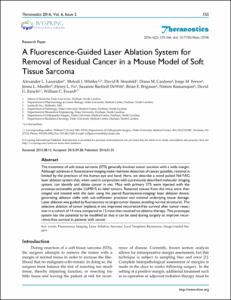 Associate Professor of Orthopaedic Surgery
I am an Orthopaedic Oncologist, with dual clinical degrees (MD and DVM).  I treat complex sarcomas in people and animals.  My laboratory studies comparative oncology - discoveries we can make about cancer by analyses across different species. Barbara Levine University Distinguished Professor
My clinical interests are the multi-modality care of patients with bone and soft tissue sarcomas and developing new sarcoma therapies. My laboratory interests include utilizing mouse models of cancer to study cancer and radiation biology in order to develop new cancer therapies in the pre-clinical setting.

Affiliate
Dr. Jenna Mueller is a postdoctoral associate in biomedical engineering who works with the Center for Global Women’s Health Technologies at Duke University to develop low-cost devices and therapies to improve the management of cervical cancer in low and middle-income countries (LMICs). She worked with a multidisciplinary team to develop the Pocket colposcope, a low-cost, portable device to screen women for cervical pre-cancer at the primary care setting, and conducted studies to demonst Robert W. Carr, Jr., Distinguished Professor of Biomedical Engineering
Dr. Ramanujam is the Robert W. Carr Professor of Engineering and Professor of Cancer Pharmacology and Global Health at Duke University. She founded the Center for Global Women’s Health Technologies (GWHT) in 2013 where she empowers trainees to create impactful solutions to improve the lives of women and girls globally. This center, since inception, has catalyzed new research activities and the development and commercialization of several technologies that advance prevention and treatmen
More Authors
Alphabetical list of authors with Scholars@Duke profiles.