Does the NBA Encourage Early Entry? 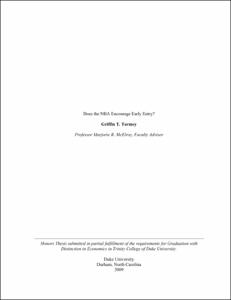 View / Download
529.2 Kb
Date
Author
Tormey, Griffin T.
Repository Usage Stats
365
views
325
downloads
Abstract
Over the last decade, the number of underclassmen selected in the first round of the NBA Draft has dramatically increased. Even when controlling for performance in college, underclassmen are paid significantly more than college seniors. What is going on here? Isn’t experience a good thing? Groothuis, Hill, and Perri (2007) were the first to argue that the rookie pay scale introduced in 1995 is responsible for the shift in behavior. They use Lazear’s (1998) option value theory as a means of explaining this action. His theory is the result of applying the financial principle of option value to labor economics. As the estimate of a worker’s future production becomes more volatile, his option value increases. In the NBA Draft, early entrants have more option value than college seniors because less information is available about them, and they are less developed. The rookie pay scale sets compensation limits that lower the relative price of rookies. With less money at risk for the same upside potential, teams have an incentive to choose early entrants. This study empirically proves that option value is significant in determining draft order after 1995, and that along with the new rookie compensation structure, it explains the unraveling in the NBA labor market.
Type
Honors thesis
Department
Mathematics
Permalink
https://hdl.handle.net/10161/1393
Citation
Tormey, Griffin T. (2009). Does the NBA Encourage Early Entry?. Honors thesis, Duke University. Retrieved from https://hdl.handle.net/10161/1393.
Collections
More Info
Show full item record