Detection of Bartonella species in the blood of veterinarians and veterinary technicians: a newly recognized occupational hazard? 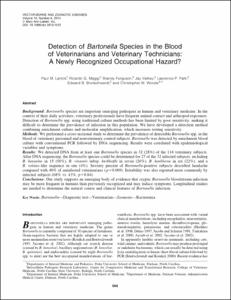 Associate Professor of Medicine
I am interested in the spatial epidemiology of infectious diseases. My research utilizes geographic information systems (GIS) and geostatistical analyses to understand the spatial and spatiotemporal distribution of diseases, and their relationship with environmental and demographic factors. I currently have active studies evaluating the spatial distribution of numerous domestic and international infectious diseases, including SARS-CoV-2 (COVID-19), cytomegalovirus, influenza, and Lyme disease. A