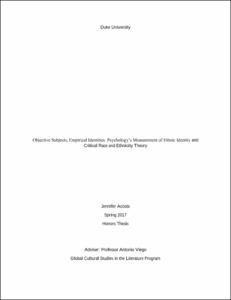 View / Download
818.2 Kb
Date
Author
Acosta, Jennifer
Advisor
Viego, Antonio
Repository Usage Stats
537
views
428
downloads
Abstract
Objective Subjects, Empirical Identities explores the kinds of questions that emerge when psychology’s conceptualization of ethnic identity comes into contact with critical race and ethnicity theory. Jean S. Phinney’s Multigroup Ethnic Identity Measure (MEIM), for example, conceptualizes ethnic identity as a construct that can be reduced to its supposedly constituent pieces, operationalized into variables for the purpose of quantitative assessment in studies. In The Protestant Ethnic and the Spirit of Capitalism, Rey Chow, a prominent critical race and ethnicity scholar, argues that, through a process called coercive mimeticism, ethnic subjects are coerced into mimicking characteristics that are recognizably ethnic (i.e., stereotypes viewed as “inherent to” ethnic subjects). By placing Chow in conversation with Phinney, this project asks: What might it look like to bring in thinking from critical race and ethnicity theory and apply it to psychology’s understanding of ethnic identity? Can these two fields be made to speak to each other, or are they so inherently ideologically and methodologically incompatible that any attempt to do so would prove futile? In working through these questions, I argue that: 1) There is a problem with how ethnic identity is conceptualized in quantitative psychological research, specifically in its lack of sociocultural and historical texture; 2) There is a need to recognize the constructed nature of the terms and concepts psychologists use in their work and apply critical perspectives to the theory and methodology used in these fields; and 3) There is a need for reflexivity on the part of researchers such that they acknowledge that they, and the work that they produce, are products of a particular historical moment. Ultimately, I contend that mainstream psychology has what critical psychologist Thomas Teo refers to as a “hermeneutic deficit,” a limitation resulting from the unacknowledged speculative and ideological interpretations made in (and made invisible by) empirical research. I call for researchers and scholars in mainstream psychology to learn from critical psychologists by practicing reflexivity and engaging in the critical reflection of the work that they produce. Psychology researchers, I conclude, have an ethical responsibility to be transparent about the hermeneutic deficit in our work.
Type
Honors thesis
Department
Literature
Subject
Ethnic and racial identity
critical race and ethnicity theory
quantitative methodology
epistemology
critical psychology
Latino Studies
Permalink
https://hdl.handle.net/10161/13973
Citation
Acosta, Jennifer (2017). Objective Subjects, Empirical Identities: Psychology’s Measurement of Ethnic Identity and Critical Race and Ethnicity Theory. Honors thesis, Duke University. Retrieved from https://hdl.handle.net/10161/13973.
Collections
More Info
Show full item record