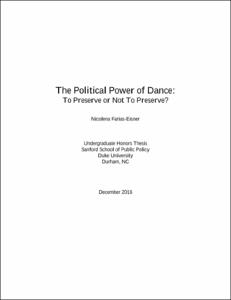 View / Download
978.6 Kb
Date
Author
Farias-Eisner, Nicolena
Advisor
Barnes, Carolyn Yvette
Repository Usage Stats
618
views
3,358
downloads
Abstract
Since the second half of the twentieth century, the performing arts community has struggled with a lack of resources, due to dwindling governmental funding. Recently, the 2008 financial recession proved the worse economic downturn for the arts. What is not well known is that the dance community suffered the most from the bust, for it is the youngest and thus most sensitive to any budget constraints, compared to theaters, symphonies or the opera.1 Moreover, because dance is not easily censored, unlike other forms of media, such as TV or the radio, dance serves as a non-verbal form of communication to express potentially powerful political thoughts. While scholars explored the idea of change in the quality of art expression due to budget constraints in terms of music, operas or theaters, they have yet to explore the topic of aligning funding cuts with the role of dance as a mechanism for conveying political messages. This thesis analyzes the impact that funding constraints due to the 2008 economic recession have had on dance’s role as a tool for expressing political messages for professional dance companies. Combining my observations from interviews and a case study with statistical financial analyses, I explore whether the potential for the political power of dance remains or if these budget cuts compromise dancers’ abilities to express themselves. Findings indicate that even though the capacity of dance as a political tool never ceases, limited funding resources jeopardize the quality of political dance expression. Nonetheless, companies remain dedicated to preserving the role of dance as a catalyst of potentially powerful political thought, by seeking alternative financial or artistic means.
Type
Honors thesis
Department
Public Policy Studies
Subject
political
economic recession
political message
dance expression
dance company
dance
Permalink
https://hdl.handle.net/10161/14022
Citation
Farias-Eisner, Nicolena (2017). The Political Power of Dance: To Preserve or Not To Preserve?. Honors thesis, Duke University. Retrieved from https://hdl.handle.net/10161/14022.
Collections
More Info
Show full item record