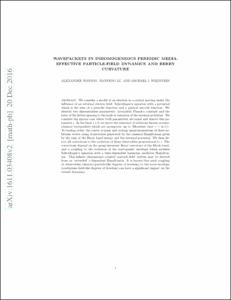 View / Download
551.7 Kb
Date
Authors
Watson, AB
Lu, J
Weinstein, MI
Repository Usage Stats
206
views
152
downloads
Abstract
We consider a model of an electron in a crystal moving under the influence of an external electric field: Schr\"{o}dinger's equation with a potential which is the sum of a periodic function and a general smooth function. We identify two dimensionless parameters: (re-scaled) Planck's constant and the ratio of the lattice spacing to the scale of variation of the external potential. We consider the special case where both parameters are equal and denote this parameter $\epsilon$. In the limit $\epsilon \downarrow 0$, we prove the existence of solutions known as semiclassical wavepackets which are asymptotic up to `Ehrenfest time' $t \sim \ln 1/\epsilon$. To leading order, the center of mass and average quasi-momentum of these solutions evolve along trajectories generated by the classical Hamiltonian given by the sum of the Bloch band energy and the external potential. We then derive all corrections to the evolution of these observables proportional to $\epsilon$. The corrections depend on the gauge-invariant Berry curvature of the Bloch band, and a coupling to the evolution of the wave-packet envelope which satisfies Schr\"{o}dinger's equation with a time-dependent harmonic oscillator Hamiltonian. This infinite dimensional coupled `particle-field' system may be derived from an `extended' $\epsilon$-dependent Hamiltonian. It is known that such coupling of observables (discrete particle-like degrees of freedom) to the wave-envelope (continuum field-like degrees of freedom) can have a significant impact on the overall dynamics.
Type
Journal article
Subject
math-ph
math-ph
cond-mat.mes-hall
math.AP
math.MP
quant-ph
Permalink
https://hdl.handle.net/10161/14060
Published Version (Please cite this version)
10.1063/1.4976200
Publication Info
Watson, AB; Lu, J; & Weinstein, MI (2017). Wavepackets in inhomogeneous periodic media: effective particle-field dynamics and Berry curvature. 10.1063/1.4976200. Retrieved from https://hdl.handle.net/10161/14060.
This is constructed from limited available data and may be imprecise. To cite this article, please review & use the official citation provided by the journal.
Collections
More Info
Show full item record William W. Elliott Assistant Research Professor
I am an applied mathematician interested in partial differential equations, numerical methods, and mathematical physics. My research has focused on problems arising in condensed matter physics and photonics. My post-doc mentor at Duke is Jianfeng Lu.
Alphabetical list of authors with Scholars@Duke profiles.