The secreted metalloprotease ADAMTS20 is required for melanoblast survival. 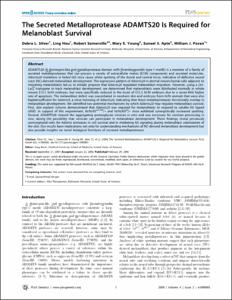 Associate Professor of Molecular Genetics and Microbiology
How is the brain assembled and sculpted during embryonic development?  Addressing this question has enormous implications for understanding neurodevelopmental disorders affecting brain size and function. In evolutionary terms, our newest brain structure is the cerebral cortex, which drives higher cognitive capacities. The overall mission of my research lab is to elucidate genetic and cellular mechanisms controlling cortical development and contributing to neurodevelopmental patho