A Climate and Operational Vulnerability Assessment of the Water Company in Salamanca, Chile 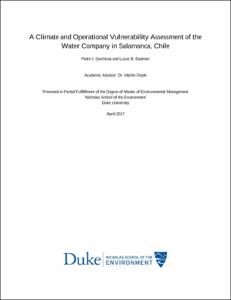 View / Download
3.1 Mb
Date
Authors
Gochicoa, Pedro I.
Eastman, Lucas B.
Advisor
Doyle, Martin
Repository Usage Stats
435
views
353
downloads
Abstract
The present master’s project is an analysis of the future vulnerability of the water company (Aguas del Valle) in Salamanca, Chile to potential changes in population, per capita water use, leakage, and climate. Scenario modelling and sensitivity analyses were carried out in Excel and Stella. We find that under a business as usual scenario, the water company will reach maximum production capacity according to its current water rights in the year 2030. In the most pessimistic scenario, the company will reach maximum capacity in year 2025 and need to produce nearly 13 million m3 in 2050, while in the most optimistic scenario, it will not reach maximum capacity before the year 2050, and will only need to produce 510,000 m3 yearly. A detailed sensitivity analysis revealed that population growth was the principal driver of water production for the future of the water company. A Monte Carlo analysis showed that there is a 60% probability that production will be 3.4 million m3 or less in year 2050. We recommend that the company reduce leakage, which has averaged 34% over the past 10 years. We also recommend that the company invest in demand management as well as an increase in storage of the system from the 9 hours of current consumptive volume to at least 24 hours of emergency storage.
Type
Master's project
Department
Nicholas School of the Environment and Earth Sciences
Subject
drinking water
water resources
climate change
water utility management
Chile
vulnerability assessment
Permalink
https://hdl.handle.net/10161/14161
Citation
Gochicoa, Pedro I.; & Eastman, Lucas B. (2017). A Climate and Operational Vulnerability Assessment of the Water Company in Salamanca, Chile. Master's project, Duke University. Retrieved from https://hdl.handle.net/10161/14161.
Collections
More Info
Show full item record