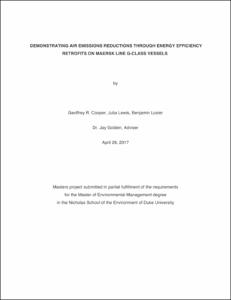 View / Download
4.5 Mb
Date
Authors
Cooper, Geoffrey
Lozier, Benjamin
Lewis, Julia
Advisor
Golden, Jay
Repository Usage Stats
843
views
975
downloads
Abstract
Maersk Line has committed to investing $1 billion over five years to retrofit around 100 vessels to increase capacity and reduce fuel consumption. $125 million of that investment was used to retrofit 12 G-class vessels. This Radical Retrofit (RR) program included redesigning the bulbous bow of each vessel, replacing existing propellers with more efficient models, and derating the main engines to make them more efficient at lower speeds. It also involved raising the bridge to increase each ship’s capacity from about 9,500 twenty-foot equivalent units (TEUs) to about 11,000 TEUs. The objective of this report is to support Maersk’s efforts on the San Pedro Bay Ports Technology Advancement Program, during its early stages, by assessing the various sources of data, developing recommendations, and designing a preliminary model for assessing the emissions reductions associated with the RR on each vessel. The two main sources of data used in this project are the Maersk Ship Performance System (MSPS) and the Control, Alarm, and Monitoring System (CAMS). The two main differences between these sources of data are the frequency in which the data is reported and the method in which it is reported. Using a series of linear regressions comparing MSPS data pre- and post-RR shows that the class average fuel consumption improvement is 19% (p-value<0.05); however, the individual models show substantial variance between the vessels. The estimates for each vessel range from 5.8% to 33.3%; and these coefficients are all statistically significant at the 0.05 level except for one vessel—the Gjertrud. However, using CAMS data to assess the uncertainty of the MSPS data shows that there is a high level of uncertainty associated with using MSPS data. The final section of this report makes three recommendations on how Maersk Line can include environmental considerations in the new Performance Platform. The recommendations are: 1) develop an emissions reductions contest that provides financial rewards for the vessel crews that reduce the most amount of CO2, 2) use social comparisons as a way of showing vessel performance against the rest of the class, and 3) include an environmental notification system that informs operators about the total emissions from voyages.
Type
Master's project
Department
Nicholas School of the Environment and Earth Sciences
Subject
energy efficiency
commercial shipping
fuel efficiency
maritime
Permalink
https://hdl.handle.net/10161/14188
Citation
Cooper, Geoffrey; Lozier, Benjamin; & Lewis, Julia (2017). Demonstrating Air Emissions Reductions Through Energy Efficiency Retrofits on Maersk Line G-Class Vessels. Master's project, Duke University. Retrieved from https://hdl.handle.net/10161/14188.
Collections
More Info
Show full item record