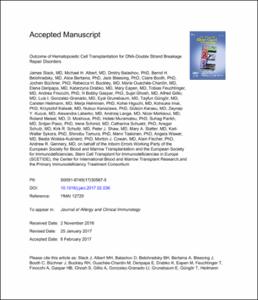 James Buren Sidbury Distinguished Professor of Pediatrics, in the School of Medicine
The overall emphasis of Dr. Buckley's research is in human T,B and NK cell development and in aberrations in their development and regulation. The work involves three particular areas of investigation: 1) the cellular and molecular bases of genetically-determined human immunodeficiency diseases, 2) the use of bone marrow stem cells to cure genetically-determined immunodeficiency diseases, and 3) the use of human SCID bone marrow stem cell chimeras to study human thymic education, T and B cell on Associate Professor of Pediatrics
Stem cell transplantation for a variety of disorders - ranging from malignant diseases such as leukemia, lymphoma and myelodysplastic syndrome to nonmalignant diseases such as sickle cell disease, thalassemias, aplastic anemia, histiocytosis and leukodystrophies. My clinical research interest is stem cell transplantation for children with primary immune deficiency disorders and hemoglobinopathies such as sickle cell anemia,thalassemia and other non-malignant disorders. In addition,I am intereste
Alphabetical list of authors with Scholars@Duke profiles.