Investigating the Anatomical Basis for Streams in the Mouse Visual Cortex 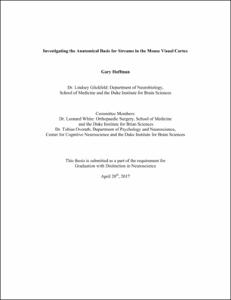 View / Download
5.5 Mb
Date
Author
Hoffman, Gary
Advisor
Glickfeld, Lindsey
Repository Usage Stats
198
views
292
downloads
Abstract
Examining the organization of the visual cortex can help show how visual processing is accomplished. For instance, a major organizational property of the primate visual cortex is the division of the higher visual areas (HVAs) into separate streams with high connectivity and similar functional properties. These streams allow for parallel processing of functionally distinct visual phenomena, with the ventral stream focusing on object recognition and the dorsal stream on localization and movement coordination. While some mechanisms for the segregation of streams from primary visual cortex (V1) to the HVAs are known, such as the clustering of neurons feeding into separate streams within specialized layers, the architecture at the level of single cells is not known. Understanding this anatomical organization is important for predicting how information is distributed, and shared, among the HVAs. In the mouse, studies examining the reciprocal connectivity between visual areas, especially Burkhalter (Wang, Sporns, & Burkhalter, 2012), have suggested a stream organization similar to that seen in primates. Modern genetic techniques in the mouse present an opportunity to study the anatomical organization and functional specializations that contribute to parallel processing in streams. Towards this goal, we set out to understand which neuronal populations in mouse V1 might participate in each stream and their degree of anatomical segregation. Here we tested the hypothesis that there is anatomical specificity, at the level of both laminar populations and individual neurons, in the makeup of streams originating in V1. Anatomical specificity was assessed by quantifying the number of neurons in each V1 lamina projecting to each HVA and by finding the probability that V1 neurons project to multiple HVAs. Although laminar specificity did not differ among the HVAs, there was a trend of V1 neurons with multiple projection targets synapsing onto HVAs in a preferred stream. Though these findings do not reveal the anatomical basis for streams seen in the primate cortex, they reveal a mechanism for sharing information among streams that could be crucial to understanding these modules’ role in visual processing. Future studies could investigate the functional properties of neurons with multiple projections to HVAs in a certain visual stream and determine physiological aspects that could contribute to sharing of information among streams with different response properties. These studies will ultimately reveal how the visual system distributes information into streams made up of highly interconnected HVAs, and how these networks are used to guide behavior.
Type
Honors thesis
Department
Biology
Subject
visual streams
mouse
neurobiology
brain connectivity
anatomical organization
perception
Permalink
https://hdl.handle.net/10161/14251
Citation
Hoffman, Gary (2017). Investigating the Anatomical Basis for Streams in the Mouse Visual Cortex. Honors thesis, Duke University. Retrieved from https://hdl.handle.net/10161/14251.
Collections
More Info
Show full item record