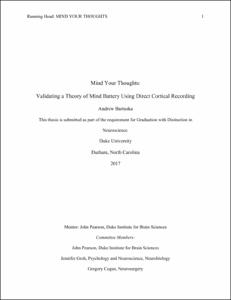 View / Download
13.7 Mb
Date
Author
Bartuska, Andrew
Advisor
Pearson, John Michael
Repository Usage Stats
144
views
213
downloads
Abstract
The cortical area known as the temporal-parietal junction (TPJ) plays an important role in social cognition, including pro-social tendencies, social interactions, and language. The TPJ has been proposed to serve as a nexus for many social processes, integrating them to construct a representation of an individual’s social environment. Previous work has shown that TPJ is more active when facing human opponents than when facing computer opponents in competitive tasks. This difference in activation highlights the role of TPJ in modulating environments in which social context might be important. Similarly, areas such as the lateral surface of the occipital lobe (involved in facial recognition and gaze detection) and the angular gyrus (involved in mentalizing and theory of mind (ToM)) project to TPJ. Moreover, TPJ dysfunction is present in many diseases, including amnesia, Alzheimer’s and schizophrenia. To date, most studies of TPJ have utilized fMRI, but since social cognition functions over a very rapid time-scale, fMRI experiments have had limited success in studying the real-time movement of information along these pathways. The objective of this experimental paradigm was to validate two widely-used Localizer and ToM tasks using electrocorticography (ECoG) in epilepsy patients at Duke Hospital in order to better understand ToM in humans by investigating the temporal dynamics of TPJ. While the main effect from the two ToM tasks previously reported in the literature was not clearly observed in our results, activity in the high gamma frequency bands, observed across tasks in electrodes consistent with prior hypotheses, suggests that more fine-grained analyses is needed to further elucidate this phenomenon. Our results have significant implications for the study of ToM, as ECoG could provide a tool to observe ToM and other social cognitive processes in normal human interactions, a process that is extremely challenging using other modalities.
Type
Honors thesis
Department
Psychology and Neuroscience
Subject
Theory of mind
social
electrocorticography
temporal-parietal junction
TPJ
Permalink
https://hdl.handle.net/10161/14256
Citation
Bartuska, Andrew (2017). Mind Your Thoughts: Validating a Theory of Mind Battery Using Direct Cortical Recording. Honors thesis, Duke University. Retrieved from https://hdl.handle.net/10161/14256.
Collections
More Info
Show full item record