Crossing the Atlantic: Carl Schenck and the Formation of American Forestry 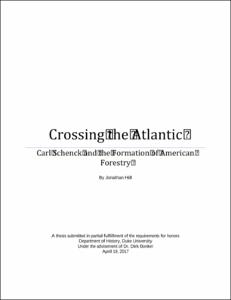 View / Download
1.0 Mb
Date
Author
Hill, Jonathan
Advisor
Dirk, Bonker
Repository Usage Stats
152
views
228
downloads
Abstract
This thesis explores the work of German forester Carl Alwin Schenck (1868-1955) in the United States at the beginning of the twentieth century and his contribution to the formation of American forestry. Crossing the Atlantic in 1895 to implement managed forestry at George Washington Vanderbilt’s Biltmore Estate in North Carolina, Schenck created his own distinct model of private forestry that yoked German ideas to American realities and founded the first school of forestry in the United States. His work at the Biltmore came to a premature end in 1909 because of the vagaries of the U.S. market for timber and the financial woes of his employer. A victim of economic circumstances beyond his control, Schenck left the United States after over a decade of work and his school dissolved soon after. Over time, Schenck was written out of U.S. environmental and forestry history of the Progressive Era, as scholars focused their attention on Gifford Pinchot, Schenck’s initial supervisor at Biltmore and eventual critic, who between 1898 and 1910 first headed the Division of Forestry and then the U.S. Forestry Service. Only recently have some historians begun to rediscover the importance of Schenck. They are doing so at a time when U.S. forestry policy has come to resemble the model of forestry that Schenck had fashioned at the dawn of the past century. This thesis re-establishes Schenck’s presence in the historical timeline of the early conservation movement and argues for the important influence Schenck had on the foundations of forestry in the United States.
Type
Honors thesis
Department
History
Subject
Biltmore
History of Forestry
Schenck, Carl A
Pinchot, Gifford
North Carolina
Permalink
https://hdl.handle.net/10161/14258
Citation
Hill, Jonathan (2017). Crossing the Atlantic: Carl Schenck and the Formation of American Forestry. Honors thesis, Duke University. Retrieved from https://hdl.handle.net/10161/14258.
Collections
More Info
Show full item record