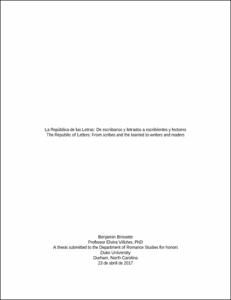 View / Download
626.6 Kb
Date
Author
Brissette, Benjamin
Advisor
Vilches, Elvira
Repository Usage Stats
303
views
238
downloads
Abstract
Historians generally accept that after the introduction of the movable type printing press, literacy expanded broadly, but rarely do researchers stop to ask why. The simple fact of easier access to the written word does not explain why more people all of a sudden began learning to read and write, long before the advent of any government-run programs of elementary education. In Spain during this period (from the late 15th through the 18th centuries) literacy was already fairly well-documented among the clergy and aristocracy, with significant increases in literacy occurring in the developing merchant class, artisans and skilled workers, and urban and rural laborers, all groups in society for which there is classically little documentation. In fact, most urban and rural laborers only learned to read and not to write, meaning that they couldn’t leave behind documents explaining their motivations, and though self-referential works do exist for merchants, artisans, and skilled workers, they rarely address the individual’s desire to learn. Given the dearth of primary sources that can offer qualitative information, a number of investigators have turned to a wide variety of secondary sources, including analyses of period literature that offer representations of these groups and their engagements with literacy, but a genre of sources that has been underutilized is that of instructional books printed at this time that taught people how to read, write, and do basic arithmetic, alongside myriad more advanced skills. The texts that this research investigated included tracts on grammar, spelling, calligraphy, common dialogue and vocabulary, and the history and etymology of the Spanish language. Their publication dates ranged from 1492 to 1692, and most of them have not been reprinted in modern editions. Due to this fact, the original versions of these texts were consulted in the National Library of Spain, in Madrid. Through a careful analysis of stated authorial intent, diction, and the level of content presented, as well as situating each work firmly within the context of Spain during the Early Modern Period, this research investigates the role of literacy in the creation of identity. Focus is directed towards the construction of national, individual, and authorial identities, and how the skills involved in literacy, specifically reading and writing, relate to each of these groups. My argument proceeds through an analysis of the importance of literacy to each of the above groups. Chapter 1 focuses on aprobaciones and licencias, documents written by government officials, as well as the letters dedicated to government officials written by the authors, to explore how literacy was believed to impact national identity. Chapter 2 transitions to focus primarily on the prologues to the reader in order to discover the perceived benefits of literacy to individuals. Chapter 3 explores how the authors of these works constructed their own identity and authority. In sum, these instructional books indicate that the skills of reading and writing are tools necessary for the construction of an identity, but that they are not integral aspects of identity for any of the three groups. Without literacy, a full identity, as defined by the standards set out in these texts, cannot be realized. With literacy, though, an identity that fully participates in society is possible, but it is defined according to the uses of literacy, and not the fact of literacy in itself.
Type
Honors thesis
Department
Romance Studies
Subject
Literacy
Early Modern Spain
Books and reading
Written communication
Self-help books
Siglos de oro
Permalink
https://hdl.handle.net/10161/14282
Citation
Brissette, Benjamin (2017). La República de las Letras: De escribanos y letrados a escribientes y lectores. Honors thesis, Duke University. Retrieved from https://hdl.handle.net/10161/14282.
Collections
More Info
Show full item record