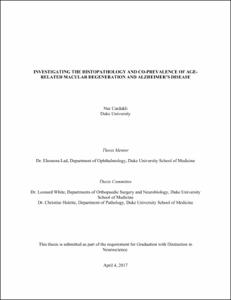 View / Download
33.3 Mb
Date
Authors
Cardakli, Nur
Lad, Eleonora Georgeta
Advisor
Lad, Eleonora Georgeta
Repository Usage Stats
149
views
82
downloads
Abstract
PURPOSE: To investigate the parallels between age-related macular degeneration (AMD) and Alzheimer’s disease (AD) by 1) characterizing the distribution of macrophages in the retina and choroid of human post-mortem eyes and 2) examining the distribution of APOE alleles in autopsy cases with AMD and AD from various age groups. METHODS: 1) Autopsy eyes were embedded in paraffin, sectioned, and stained with H&E. Immunohistochemistry against CD68+ and CD163+ was performed. Sections for 36 patients aged 65+ were graded using the Sarks AMD grading system. Photographs of the stained macular and peripheral sections of the retina and choroid were taken using a Vanox AHSB3 microscope at 10x magnification and a D800 Nikon camera. The number of macrophages visualized by the CD163+ and CD68+ IHC stains was manually counted. 2) The medical history and genetics testing data were extracted from charts of 576 autopsy cases and cross-referenced with the histopathologically-determined AMD grade. The cases were split into cohorts based on the age at death and presence of AMD. The cause and age of death, APOE allele frequencies, and presence of AMD were compared between the cohorts and with the reported global allele frequency distribution of the APOE gene. RESULTS: Cells stained by CD68+ were mainly confined to the inner retina of both the macula and periphery. The number of CD68+ macrophages in the outer macula increased with AMD severity and differed significantly between normal (Sarks grade I) and intermediate (Sarks grade IV) (p=0.037) and normal and advanced (Sarks grade VI) AMD (p=0.013). CD163+ cells were confined almost exclusively to the inner retina in both the macula and periphery in normal cases and early AMD (Sarks grades I and II). The number of CD163+ macrophages in the outer retina increased with AMD severity. There was a significant difference in the number of CD163+ stained macrophages in the outer macula between Sarks grade I and grade IV eyes (p=0.007) and grade I and VI eyes (p=0.011). There were no differences between the average number of CD163+ stained choroidal macrophages in the macula and periphery for and across any Sarks AMD stages after correction for multiple comparisons. In the co-prevalence analysis, the proportions of neither APOE genotypes nor APOE allele frequencies significantly differed between the <65 and >70 cohorts (p30.257). The APOE allele frequencies of the <65 cohort significantly differed from the reported global allele frequencies (p=0.010); those of the >70 cohort did not (p=0.237). In both the dementia and APOE-tested subgroups, patients in the >70 cohort were more likely to have AMD than those in the <65 cohort (p<0.0001 and p=0.002, respectively). The proportion of individual APOE allele frequencies did not significantly differ between AMD and non-AMD cohorts (p30.122). The distribution of APOE allele frequencies of the AMD cohort significantly differed from the global distribution (p=0.009), but that of the non-AMD cohort did not (p=0.063). Patients in the AMD cohort showed a higher frequency of the E4 allele (p=0.001) and patients in the non-AMD cohort showed a higher frequency of the E2 allele (p=0.031) than the global distribution of APOE alleles. CONCLUSIONS: The alterations in the number and localization of retinal, but not choroidal, CD163+ stained macrophages in intermediate and advanced Sarks AMD stages suggest that these retinal macrophages may represent a marker for the progression of AMD and may be involved in its pathogenesis. The co-prevalence findings support the role of the APOE gene in early-onset AD and identify a potential shared genetic factor in AMD and AD with the APOE gene. Additional studies are warranted to elucidate the mechanisms behind the co-prevalence of AMD and AD and to further examine the role of the APOE gene in AMD pathogenesis.
Type
Honors thesis
Department
Psychology and Neuroscience
Subject
Macular degeneration
Alzheimer's disease
Ophthalmology
Neuroscience
Histopathology
Permalink
https://hdl.handle.net/10161/14301
Citation
Cardakli, Nur; & Lad, Eleonora Georgeta (2017). Investigating the Histopathology and Co-prevalence of Age-related Macular Degeneration and Alzheimer's Disease. Honors thesis, Duke University. Retrieved from https://hdl.handle.net/10161/14301.
Collections
More Info
Show full item record