Coffee and Civil War: The Cash Crop That Built the Foundations for the Mass Slaughter of Mayans during the Guatemalan Civil War 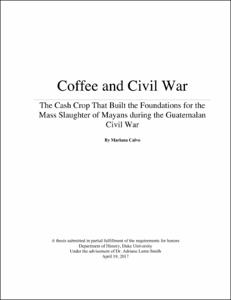 View / Download
14.1 Mb
Date
Author
Calvo, Mariana
Advisor
Lentz-Smith, Adriane
Repository Usage Stats
333
views
620
downloads
Abstract
This thesis explores the connections between coffee production and genocide in Guatemala. This thesis centers its analysis in the 19th and 20th centuries when coffee was Guatemala’s main cash crop. Coffee became Guatemala’s main export after the Liberal Revolution of 1871. Prior to 1871, the ruling oligarchy in Guatemala had been of pure European descent, but the Liberal Revolution of 1871 gave power to the ladinos, people of mixed Mayan and European descent. With the rise of coffee as an export crop and with the rise of ladinos to power, indigenous Guatemalans from the western highlands were displaced from their lands and forced to labor on coffee plantations in the adjacent piedmont. Ladino elites used racism to justify the displacement and enslavement of the indigenous population, and these beliefs, along with the resentment created by the continued exploitation of indigenous land and labor culminated in the Guatemalan Civil War (1960-1996). This conflict resulted in the genocide of Maya communities. Historians have traced the war to the 1954 CIA backed coup that deposed democratically elected president, Jacobo Arbenz over fears that he was a Communist. This thesis will take a different approach and argue that the origins of the war can be traced to the introduction of coffee in the late 19th century. This thesis is important to understanding the mechanisms of genocide because it argues that dependence on commodities leads to the commodification of entire groups of people.
Type
Honors thesis
Department
History
Subject
Guatemala
Race
Coffee
Genocide
Latin America
Cold War
Permalink
https://hdl.handle.net/10161/14309
Citation
Calvo, Mariana (2017). Coffee and Civil War: The Cash Crop That Built the Foundations for the Mass Slaughter of Mayans during the Guatemalan Civil War. Honors thesis, Duke University. Retrieved from https://hdl.handle.net/10161/14309.
Collections
More Info
Show full item record